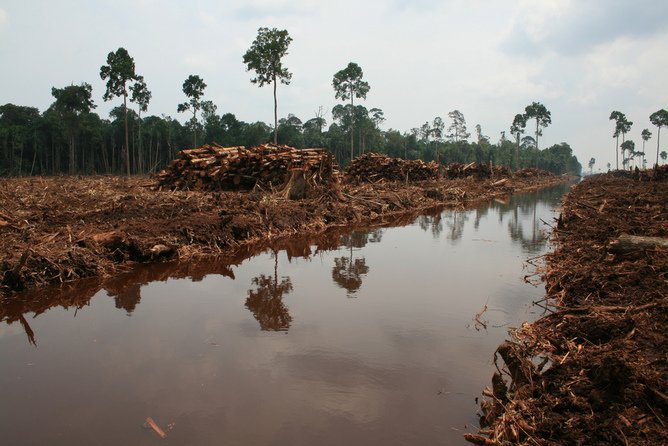 At the recent UN Climate Summit in New York there was little in the way of new climate policy announcements, but 27 countries did sign a new forest agreement — the New York Declaration on Forests.

Some 27 national governments, 34 major companies, and 61 NGOs vowed to halve deforestation by 2020, and end it by 2030. Signatories included some countries with high rates of deforestation — Democratic Republic of Congo, Indonesia and Peru— but not Brazil, or some of the African countries now experiencing significant forest loss and degradation.

Why forests are important for climate change

That conclusion, among others, helped catalyse agreement at the 2007 Bali UN Climate Change Conference on the REDD mechanism, for Reducing Emissions from Deforestation and forest Degradation.

REDD was soon expanded to REDD+, to include forest management and restoration to enhance carbon stocks, and was one of the few points of agreement at the otherwise anti-climatic 2009 Copenhagen Climate Change Conference.

However, in the absence of a more general international agreement to address climate change and provide the framework and funds for REDD+ on more than a pilot scale, REDD+ initiatives have remained embryonic and inconsequential for addressing climate change or delivering economic benefits for forest conservation, management or restoration.

While REDD+ has progressed further than most other elements of the international climate change regime, the languishing state of REDD+ has become something of a metaphor for the overall state of global inaction on climate change.

In the same period, forest loss globally has continued — but at slightly reduced rates compared to previous decades . The UN Food and Agriculture Organisation estimates annual loss of 13 million hectares each year between 2000 and 2010, down from 16 million hectares in the decade before.

Most of this was still in the tropics — but the drivers of deforestation have shifted from forestry and smallholder agriculture to agribusiness – notably for beef, palm oil and soy.

The location of deforestation has changed, too. Deforestation has shifted away from Brazil — thanks to stronger governance and supply chain management — to Indonesia, where palm oil expansion has accelerated, and to parts of Africa.

For those reasons, the focus of international deforestation discussions has also shifted to better address the role of agribusiness.

For example, the Paris-based Consumer Goods Forum, which represents many global food processors and retailers, vowed to achieve zero net deforestation by 2020. They subsequently formed the Tropical Forest Alliance 2020 with the US government.

Major companies, such as Wilmar with a 45% market share of palm oil globally, and Asia Pulp and Paper, historically a major agent of deforestation in Sumatra, have made zero deforestation commitments.

NGOs such as Greenpeace and WWF have been advocates and brokers of these commitments, facilitated by research and tools from think-tanks such as the World Resources Institute. Governments such as those of the UK and the US, committed to both business and climate change goals, have fostered these initiatives.

In parallel, Norway, with its strong sovereign wealth fund and commitment to REDD+, has pursued international direct action, negotiating a Forest Moratorium with Indonesia in 2010 and REDD+-related payments with Brazil.

While the success of these initiatives has been mixed, they have together formed a much broader platform for addressing forest loss than just the intergovernmental agreement from which REDD first emerged.

Increasing recognition of the rights of Indigenous peoples over forests — for example, in Indonesia’s Constitutional Court decision of 2013 — are also significant in this regard.

The New York declaration is yet another entrant on the scene. The first was 22 years ago, at the 1992 Earth Summit in Rio de Janeiro.

In that sense the declaration is another coalition of the willing, with the same limitations that have constrained effective global action on forests since the 1992 Rio Statement of Forest Principles.

But engaging with major business, and getting commitments, is a vital foundation for forest conservation and climate action.

The Declaration is accompanied by a voluntary Action Agenda. This includes more forest conservation deals between the Government of Norway and tropical forest nations – in this case, Liberia and Peru (to which Germany is also contributing). 21 consumer goods companies (beef, palm oil, pulp and paper etc) committed to zero deforestation in a “Supply Chain Revolution”. And indigenous peoples FROM… recommitted to forest conservation. Of course, all of these actions are conditional on the actions of others.

Amongst the government signatories, there are many of the usual inclusions — many of the Europeans, the Democratic Republic of Congo, Indonesia, Japan, Peru, Mexico, UK and USA — and now-usual exclusions – Australia, Brazil, Canada and Malaysia.

The same is true of the companies represented, although the numbers and market share that those committed represent have been growing significantly.

Of course, commitments made in New York or elsewhere and outcomes on the ground don’t necessarily correlate – Indonesia’s deforestation rate has overtaken Brazil’s, notwithstanding Indonesia’s Moratorium and partnership with Norway.

Brazil’s actions over the past decade to curb deforestation have been successful primarily because of national action, albeit with international support and partnership. Under its current leadership, at least, Brazil remains reluctant to be seen to cede sovereignity to international agreements.

Australia’s domestic commitment to direct action on climate change may be mirrored internationally in initiatives that emerge from the Australian Government’s Rainforest Summit on 12 November. That remains to be seen.

As the Center for International Forestry Research’s Director General Peter Holmgren noted, the lack of explicit connection between the agriculture and forest agendas is a problem and a paradox; ultimately, it is the synergies and trade-offs between agriculture and forests that will determine the future of each.

This disjunct is also evident in the negotiation of the UN post-2015 Sustainable Development Goals. Addressing this disconnect in a landscape context remains important work in progress, and a necessary complement to what was agreed in New York.

Opinion about the value of the New York Climate Summit is divided, from “changing international climate politic forever” to noting the continuing disjunct between rhetoric and reality.

International agreement matters, as we found in the aftermath of the Copenhagen Climate Change Conference. But it need not constrain action on the ground, as Brazil has demonstrated.