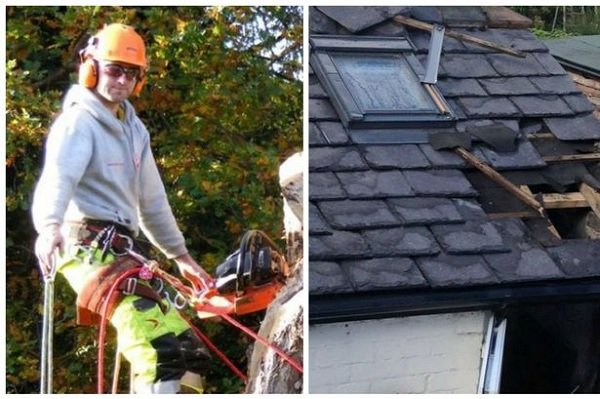 A tree surgeon from Stockport has been left unable to work after thieves broke through the roof of his shed and stole all his chainsaws.

Adam Copeland, 33, from High Lane, was left stunned when he looked out of his window on Wednesday morning to see a big hole in his outbuilding roof.

Burglars had removed slates and felt to steal £4,500 of tree cutting equipment including six chainsaws.

They also stole hedge-trimmers, a drill, harnesses and workwear some time between midnight and 6am on Wednesday.

Adam said: “I’m absolutely gutted. It has taken years to build up my equipment and it’s all expensive stuff.

“Obviously I’m very security-minded; the outhouse door has bolts, a lock and a padlock on it and it’s brick built – but how do you prepare for somebody breaking through the roof?

“You just don’t expect that. I’m down but I’m not beat.

“The support from friends has been amazing and I’m just trying not to dwell on it.”

Adam, who lives on Buxton Road, is owner of LTS Treework and has been working as a tree surgeon across Greater Manchester, Cheshire and the High Peak.

The equipment stolen is essential to his work so he has had to cancel jobs during the next week but other tradesman and friends have offered theirs to help. This should mean he can start work within a week or so.

Adam had been expanding the business and had rented a new larger storage unit.

His equipment had been due to be transferred to the new location the next day, but now he will have to build it all back up from scratch.

A police spokesman appealed for witnesses and said the burglary had been reported on Wednesday at 8.40am and officers were investigating.

He added: “They climbed on the roof of the out house and removed slates and cut felt to get in.

“What was stolen was quite specific so anyone who saw anything or is offered the equipment please let us know.”