STIHL TIMBERSPORTS® British Championship is back with virtual event 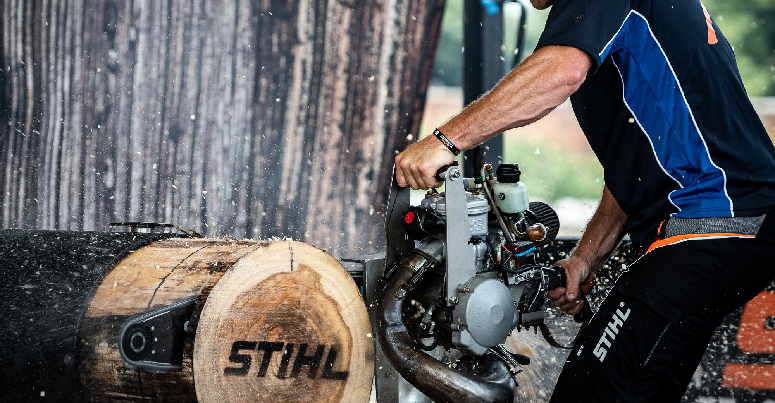 After a one-year hiatus, the best lumberjack athletes across the nation are back to compete for the crown at the STIHL TIMBERSPORTS® British Championship in September, as they chop and slice their way through large logs in seconds using a combination of axes, saws and sheer strength.

The STIHL TIMBERSPORTS® British Championship will be live streamed from the Telford International Centre on Sunday 5th September, allowing extreme sports fans the opportunity to see the live action up close and at no cost. This year’s event will see top logger sports athletes battle against each other in six challenging disciplines; Stock Saw, Underhand Chop, Single Buck, Standing Block Chop, Springboard and Hot Saw.

In celebration of TIMBERSPORTS® action returning to UK audiences, STIHL has launched a limited-edition STIHL TIMBERSPORTS® chainsaw bar, available on the MS 201 T, STIHL’s most powerful arborist chainsaw, as well as separately. The TIMBERSPORTS® design has been added to the Rollomatic E 35cm 3/8p 1.3mm bar and is the perfect choice for action sports fans replacing their bar or treating themselves to a new saw.

To take home the top prize and be crowned the best TIMBERSPORTS® athlete in the UK, competitors are awarded maximum points for the fastest time and must display power, skill, precision and endurance in all six disciplines. Competitors will include five-time British champion Elgan Pugh, who is aiming to win his sixth consecutive STIHL TIMBERSPORTS® British Championship.

To add even more excitement to the event, the 2021 Rookie Championship will also take place on the same day and will be available on the live stream, giving TIMBERSPORTS® fans access to more action than ever before. The top nine rookies from around the country will compete against each other across four of the six TIMBERSPORTS® disciplines, accumulating points in each round based on their placing in each discipline. The athlete with the most points at the end of the fourth round will be crowned the 2021 STIHL TIMBERSPORTS® British Rookie Champion.

Simon Hewitt, head of marketing at STIHL GB, said: “After a tough 18 months due to the pandemic, we are really excited to have the British Championship back and to give the fans access to the exciting live TIMBERSPORTS® action they have been missing. The live stream event will allow extreme sports fans to get as close to the action as possible and all the athletes are determined to put on a great show!

“The athletes have had extra time to prepare due to the postponement of last year’s event, so we’re expecting them to be more fiercely competitive than ever and push themselves to new limits. It should make for a great spectacle and I wish them all the best of luck!”

Springboard – athletes’ slot two springboards into a vertical tree trunk then chop through a block of wood at the top of the tree, nearly 3m above the ground