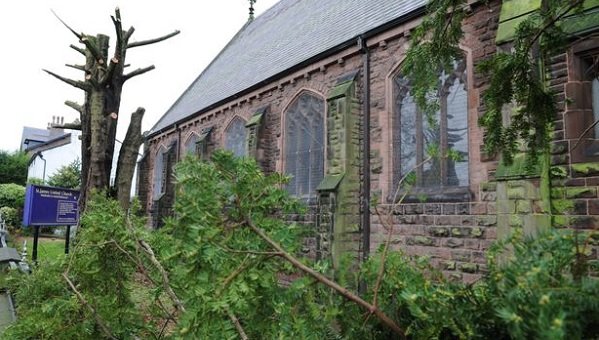 Ancient trees which were destroyed despite being the subject of preservation orders are due to be replaced with young trees this week after a mistake by Liverpool council officers.

Officials at St James’ Methodist and United Reformed Church in Woolton were told they could have been prosecuted for the criminal act of removing the yew trees, thought to have been hundreds of years old.

It has now been found though that it was Liverpool council officers at fault for wrongly telling church managers the trees were not protected.

Liverpool council launched an investigation after reports from angry residents about two yew trees chopped down last December at the church.

The authority’s planning committee agreed last month that the church would be ordered to plant new yew trees but there would be no prosecution.

Steve Skyner, chairman of property and finance at St James, said: “From our perspective there’s been a lot of discontentment in the local community about this.

“It is an emotive subject. “We’re happy with the plan to replant the trees.

“From our point of view as a church there was no intent to cause upset, we were acting on advice from the council.”

He added that they had wanted to cut down the trees as they were damaging the church, overhanging the pavement and causing a health and safety risk from algae.

A report by planning officers at Liverpool council said: “Two enquiries were made to the council’s call centre (LDL) over the status of protection of these two yew trees as the church wished to remove them, due to moss forming on the roof of the church. One enquiry was made by the church and one by the tree contractor. Unfortunately on both occasions the LDL call centre gave out incorrect information and informed the church/contractor that the trees were not protected. It was therefore, on the basis of this advice that the church undertook the works.”

The report adds that a Tree Preservation Order was served on the trees in 2010 but there has been a change of personnel at the church since then and the information had not been passed on.

It says: “Notwithstanding this, the head of planning is satisfied that the works undertaken were done in good faith, given the efforts made by the current church staff and their contractor to establish the protected status of the trees prior to any such works commencing.”

Liverpool council has changed its policy for dealing with calls about Tree Preservation Orders following the mix-up.

The report said: “In light of the errors made that have been highlighted by this case, all tree queries are now dealt with solely by the Tree Officer to ensure only correct information is issued in the future.”