Are St Albans trees being choked by Christmas lights? 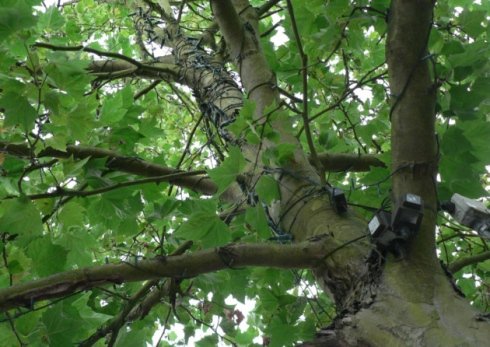 Precious” trees which soften the grey concrete and brick buildings of St Albans’ city centre with a touch of green are in danger of being strangled with Christmas lights.

St Albans Civic Society has spoken of its fears for the London Plane trees adorning St Peter’s Street which have had cabled lights wound around their trunks and branches continuously for the past four years.

Society member Eric Roberts said: “It’s a magnificent avenue of trees and to lose them would be a tragedy.”

Thirty-three London Plane trees were bought to replace aged lime trees over a decade ago through a sponsorship scheme, where local organisations including schools and businesses paid £300 for each tree.

However, several years ago a decision was made to have all street trees placed under the control of Herts county council.

But the society has found it “impossible” to find out who at county hall is looking after the trees.

The authority’s lack of action has prompted county councillor for St Albans south Sandy Walkington to say: “No one could accuse the council of being tree huggers.

“Their performance for highway trees has been lamentable.

“I fully share the Civic Society’s concern that inaction over the Christmas light cabling will cause long-term damage. The trees are an expression of civic pride and crucial to the public realm of our city centre.”

District councillor for Clarence Chris White added: “Pruning and pollarding is no longer being carried out regularly and trees are seen merely as a potential safety problem.”

A spokesman for the council said its responsibility is to maintain trees to ensure they do not pose a danger to pedestrians and road users.

He added: “We have inspected the wiring and found that it is not posing a hazard. Responsibility for the wiring and lights, however, lies with the district council.”