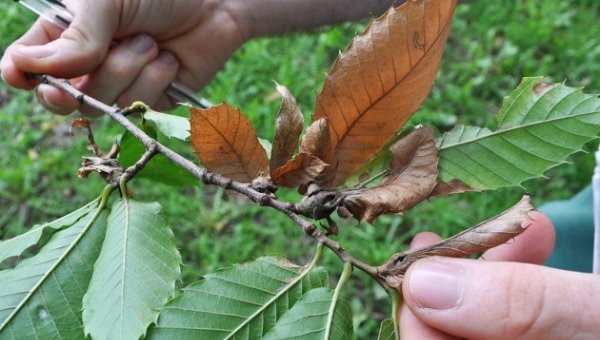 The Forestry Commission served notice on Herts county council after oriental chestnut gall wasps were found in Ashley Road, near its junction with Oakdene Road.

Nine sweet chestnut trees were felled last Thursday (2) to prevent the gall from spreading any further – the authority will replace them with a different type of tree.

Cllr Terry Douris, cabinet member for highways, said: “As this tree pest weakens infected trees, we were asked to remove them to protect public safety and to help prevent further spread of this pest.

“It’s unfortunate to see the removal of these trees, which are about 30 years old, but this is a virulent pest we’re dealing with and unless it’s dealt with, it could infect more sweet chestnut trees and pose health and safety problems for residents.”

The Herts Advertiser understands that the outbreak was restricted to just Ashley Road, as the pest has not been discovered anywhere else in the local area.

It is a tree pest because its larvae causes abnormal growths, called galls, to form on leaves, twigs and stalks. These galls eventually weaken the tree, making it susceptible to other pests and diseases.

The wasp was accidentally introduced in international trade to Europe and North America. Its entry into Britain is under investigation by the commission.

Of Asian origin, the insect only affects sweet chestnut trees in the Castanea family of trees – it does not attack horse chestnut or ‘conker’ trees which are under attack from other pests such as leaf miner and bleeding canker.

The wasp is considered a threat as sweet chestnut is valued as a timber species, and is locally important in Britain.

St Albans MP Anne Main said: “While it is a shame to lose the trees in the street scene, the removal had to be done to stop the wasps’ spread as they are such an invasive species.

“This will help protect other sweet chestnut trees in the UK.”