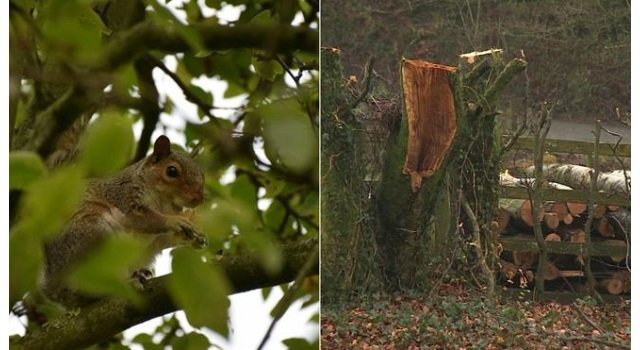 Damage caused by squirrels has been blamed for the need to chop down a mile-long stretch of trees.

The animals have been stripping bark off trees along the A38 in Cornwall causing branches to fall onto the road.

Land owners have now cut down hundreds of the beech trees because of the danger to traffic.

Some residents have complained about the way the trees were removed saying the remaining stumps look like “jagged teeth”.

The tree-lined road between Bodmin and Dobwalls was recently closed for two weeks for maintenance works and Highways England advised land owners to check for any safety hazards at the same time.

As a result, the Boconnoc Estate decided to chop down a long line of trees.

Estate Manager Richard Morris said: “The overgrown beech hedging along the Glynn valley had become dangerous as a result of squirrel damage causing branches to drop onto the A38.

“At the request of Highways England we have coppiced the trees which will now be maintained as a high beech hedge in the future.”

Local people are angry at the way the trees have been cut, leaving about 4ft (1.2m) of bare stumps.

Libby Pidcock from Cardinham said: “I’m appalled, it looks like the trees have been vandalised, they look like jagged teeth.”

The Forestry Commission said squirrel damage to trees in this area is becoming an issue.

Highways England said it is “not a particular problem” around the country’s roads.