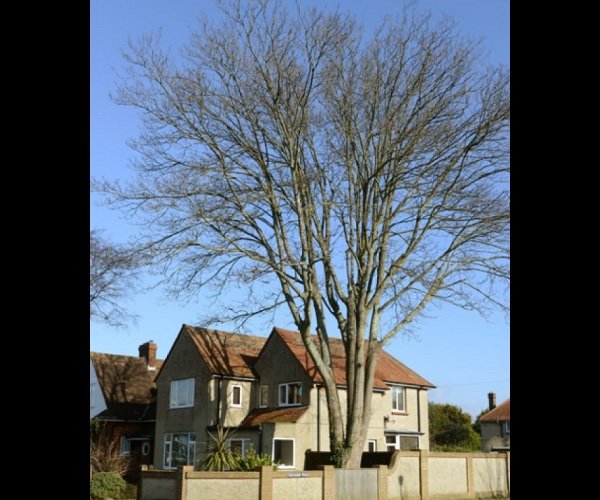 This tree has been described as ‘splendid’ – but it nearly reduced a mother to tears as she pleaded with councillors to fell it to relieve the hell it caused her family.

The Tate family, of Beaumont Road, Broadwater, applied to fell the towering sycamore over safety fears and after it caused £1,500 of damage to drains.

But the specimen is subject to a Tree Protection Order, preventing them felling it without permission.

Addressing Worthing planning committee last Wednesday, emotional mother Debbie Tate said: “I have two young daughters whose bedrooms are directly under the tree and when we get high wind they do wake up. They are very fearful and come into our room and ask if the tree is going to fall.

“Home is where you are supposed to feel safe and protected and at the moment, with that tree in the garden, I just do not feel safe.”

The family had made a similar application in 2014, which was rejected by the committee and upon appeal.

They returned to the committee with the drain evidence, also citing issues with bird excrement, leaves and the potential for falling branches.

But councillors were unconvinced by their case.

Councillor Edward Crouch said: “While I have sympathy for the fact it’s clearly having an impact on the family, I am extremely concerned that this tree is a fantastic tree.

“Any tree can fall down and I really don’t think it’s good enough case to fell this tree with what is the flimsiest case.”

Green councillor James Doyle said his six-year-old daughter was scared by a similar tree in his garden.

But he had built a tree house in it and during stormy weather, sat up there with her and her fears turned into excitement.

The committee refused the application.

After the meeting, Broadwater councillor Vicky Taylor, who supported the Tates, said she was ‘disappointed’ with the decision.

“I am extremely disappointed on behalf on the applicants who have had a really rough time due to this tree,” she said.

“It is hard to put across in the allotted minutes the evidence of the harm caused to them and their property.”

She added: “With the applicants willing to replace the tree by condition and the amount of support from many neighbours, I wonder who the committee were serving with their decision.” The family declined to comment further.