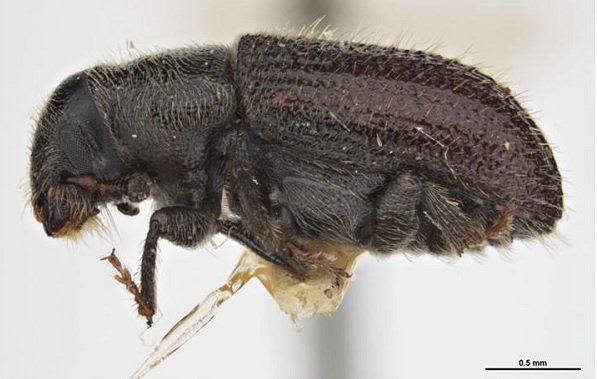 A team of scientists has given the forests of South Wales the all clear following concerns that a new tree pest could have migrated across the border from England.

It was thought that Welsh forests could be at risk from the Large Larch Beetle and, as part of safe-guarding the future of Wales’ larch trees, the team from the IMPACT forestry research project carried out a two-month monitoring programme.

“We are pleased to report that we did not find any evidence of a breeding population of the  beetle here in Wales,” according to Tim Saunders, of IMPACT, the joint Wales, Ireland and EU-funded project which looks at tree pests and climate change.

The beetle (Ips cembrae) has already been found in the Forest of Dean, and the project team was charged with investigating to see whether larch trees already weakened in Wales by ramorum disease, caused by the fungus-like Phytophthora ramorumorganism, were attracting this new pest.

“The key thing about trees being weakened is that they make it easier for Ips cembrae to breed, and this increases the risk of populations building up to such a level that they can begin to kill living trees directly,” added Mr Saunders.

“This proactive action, monitoring the forest to see whether this important pest has migrated here, has given Welsh foresters a clearer understanding of what is happening on the ground, and will help with planning any possible counter-measures.”

The concern is that if Ips cembrae were to become established in Wales it could result in more larch losses, potentially affecting all species of larch, and because it can breed in newly felled trees and cause staining of the timber, possibly reducing the value of Sitka spruce, the main commercial crop in Wales.

About 1.5 million tonnes of larch timber in Wales have been affected by ramorum disease since it was first found affecting larch trees in Wales in 2010, mostly in the south.

However, the rate of spread of the disease slowed dramatically in 2014, with only 385 hectares of woodland outside the core disease zone in South Wales confirmed with new infection, compared with 3,715 in 2013.