Shock in North Walsham as special hornbeam trees are cut down 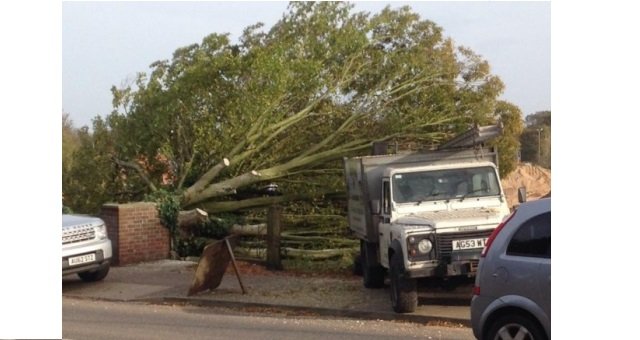 The “special” hornbeams on Norwich Road, North Walsham, were subject to a tree preservation order from November 2008.

Social media was alive with horror within minutes of the chainsaws being revved up.

Many thought the trees were protected but yesterday it was confirmed that an original tree protection order had later been lifted.

Hopkins Homes, behind the 176-home development on the former HL Foods Factory base, will plant five new hornbeams at the front of the site where building has just started.

Robert Eburne, Hopkins Homes planning manager, said the decision to remove the trees was “regrettable” but “they could not be saved due to highway safety and highway visibility concerns”.

He said it was something the firm had agonised over for years.

Barry Holden, 69, from Birds Road, North Walsham, said: “I’m furious. Had I know about it, I would have stood in front of the trees before they were cut down. Everyone in the town is furious about it. I have never seen anything stir people up as much as this. The hornbeams were part of the town. They grew into something spectacular and are now gone.”

He said the two trees were the only two of their kind in North Walsham and were a magnificent welcome for people entering the town.

People voiced messages of upset and surprise about the removal on North Walsham and District Community Archive Facebook page.

Wayne Beauchamp, 44, from Millfield Road, North Walsham, said: “Everyone was so shocked. They were nice and quite unusual. They were the last remaining parts of one of the town’s former biggest employers – HL Foods. They have been part of my landscape since I was born.”

The hornbeams marked the entrance to the HL Foods Factory site for decades.

The application was previously refused by the same committee in 2008, causing Hopkins to appeal the decision the following year when the order was lifted by a government planning inspector.

Vivienne Uprichard, who represents North Walsham East, spoke out about protecting the trees during the planning meeting last year.

She said: “I’m really sorry to see the hornbeams go. They were a landmark. We can take comfort in the fact Hopkins are planting more trees.”