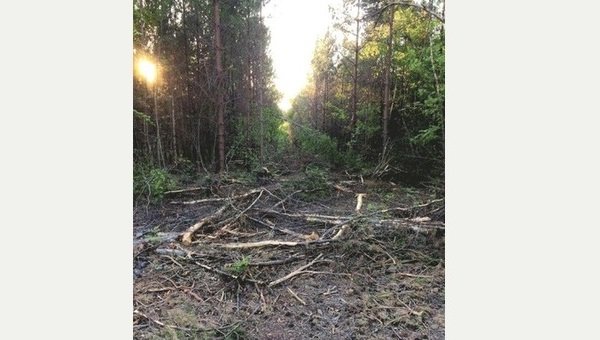 A MUM-OF-THREE was reduced to tears when she saw the “desecration” of precious woodland. Large-scale tree felling and scrubland clearance is under way at Limpsfield Chart – a popular beauty spot – to the dismay of many.

Suzie Hammerton, who lives in nearby Chapel Road, said: “This is a stunning countryside area but the scene now is something like Hiroshima. It’s absolutely horrific, total desecration. Acres and acres of woodland have been annihilated, with thousands of logs in big piles from felled trees.”

Mrs Hammerton said she first came across the scene about a week ago.She added: “Big bulldozers have been working in the woods, and some networks of footpaths have disappeared. It’s just hard to believe it.”

Her husband Neil said: “I’m pretty thick-skinned but I am pretty shocked by what has taken place.”

He said his wife is a former national newspaper photographer, but that she was in tears by the site which beheld her when she took a stroll on the Chart. Mr Hammerton added: “I’ve lived in this area for 19 years but have never seen anything like this. The lack of dialogue over what is going on is hard to understand.”

He said that although a handful of signs explaining the work had been put up on trees and notice boards, widespread consultation would have helped to ease local residents’ concerns. A contractor working on the site last Wednesday said he had received “a lot of grief” from local residents over the huge controversial project.

The land is owned by the Titsey estate, and the site’s managing agents are Brighton-based firm Strutt and Parker. In a statement, it said the work is a Forestry Commission scheme to restore the land. It added: “These operations necessitate a certain amount of disturbance. However the long-term impacts will bring significant environmental and amenity benefits to this wonderful forest.”

The work includes felling mature pines for timber and then planting the next generation of trees. It will also involve removing “invasive” rhododendrons from the area, upgrading the access way to Moorhouse Lane, thinning some wooded areas and improving bridleways – including some scrub burning.