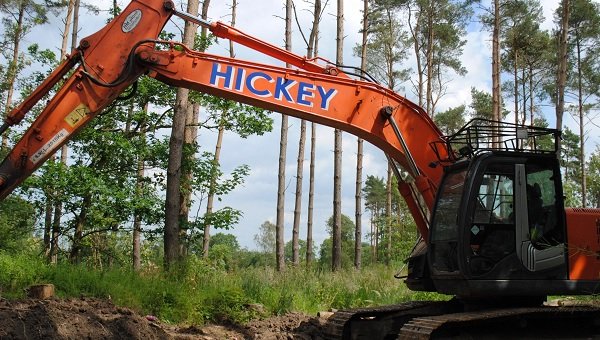 MYSTERY surrounds why hundreds of trees have been felled on a site near Basingstoke – but local residents fear it could be paving the way for a traveller invasion.

Around 250 trees were chopped down and burned at the site in Dixon Road, next to Sherfield Park, in Sherfield-on-Loddon.

Local residents fear the action has been taken in preparation for travellers to move in after documents obtained from the Land Registry show the land was bought by a group of men in April for £60,000, one of whom has documented connections with the traveller community.

The Land Registry lists the proprietors of the site as John and Sammy Smith, of Almond Close, Farnborough, James Tombs, of Forest Farm, Tadley, and Boysie Biddle, of Justin Park, Market Harborough, in Leicestershire.

A man called Boysie Biddle unsuccessfully applied to build a traveller site near Burghfield Common, in 2012.

Stuart Burgess, from the Forestry Commission, said: “We have advised the landowners in writing not to fell any more trees.”

He added evidence had been gathered from the site, including the number of trees felled, and a decision on enforcement will be taken by the commission’s national office.

Basingstoke and Deane Borough Council also sought a court injunction from Winchester County Court to “prevent any building, engineering or other operations in, on, over or under the land without planning permission; or making a material change in the use of the land by using it for residential purposes.”

This order was granted last Friday.

Karen Brimacombe, the council’s corporate director, said: “Residents’ concerns have focused on the possibility of this land being used by the new owners as a traveller site.

“Given the size and scale of the site, and the potential impact from a change of use of the land for whatever purpose, the judge granted the injunction. This injunction forbids anyone from doing anything on the land that would need planning permission.

“Any evidence that anyone had breached this order could result in them being sent to prison by the county court.”

Mrs Brimacombe advised members of the public to contact the council if they have any evidence that the order has been breached.

Borough councillor Elaine Still, who represents Chineham, said: “I’m disgusted with the way it’s gone forward, and the complete devastation of wildlife. I know there are bats there, and dormice. And I have heard there have been lots of deer killed on the road since. No one knows what this land is going to be used for.”

Several members of the public contacted The Gazette, expressing concerns that the site could soon be occupied by travellers.

A couple from Sherfield Park, who did not want to be named, said: “This news is horrifying. We moved here some years ago because of the peaceful environment and community feel that Sherfield Park offered.

“We did not move here to have to deal with the countless issues that living next to a traveller site has been well reported to bring. Are we to now encounter a Dale Farm scenario?”

Concerned Nadine Laws said: “It’s quite clear to anyone that the land is being prepared for some use other than forestry.”

None of the trees were the subject of Tree Preservation Orders (TPO), meaning the council was unable to take any direct action.

However, the matter has been referred to a number of partner agencies and the remaining trees now have TPOs served on them, preventing them from being chopped down without permission.

Basingstoke MP Maria Miller said she had been contacted by a number of residents about the tree felling. She added: “This woodland area has been devastated by the unlawful felling of large pine trees on the site, and I have already contacted the Forestry Commission about the need to take action against the contravention of the Forestry Act.

“Local residents are clearly concerned about further activity at the site, and I welcome the borough council’s swift action in getting an injunction to prevent any more illegal work on the land, or its use for residential purposes.

“I am in touch with the borough council and Basingstoke police to see what further protection is available to residents if the new owners of the land continue to flout the law.”

Cllr Ranil Jayawardena, ward member for Sherfield-on-Loddon, said: “This is a terrible situation. I’m pleased that we now have an injunction from the court. It’s important that it is adhered to and enforced.”

He said the police had increased patrols of the area, adding: “The site has been bought and there’s nothing wrong with somebody buying the land. It’s what they are doing with it that’s wrong.”