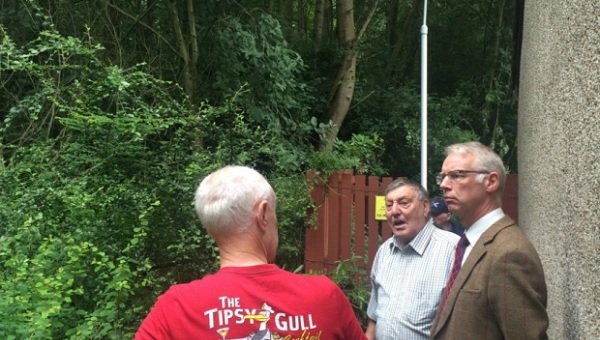 Residents in a sheltered housing complex in Glenrothes say their lives are being made a misery due to problems caused by surrounding woodland.

Occupants in Blairadam Court in Balfarg say they are living in fear of the mature trees, some of which are over 50 feet tall, and they say it’s only a matter of time before someone is seriously injured.

Only last week two trees hitting one property were cut down, but residents say this is the first any organisation has done – and the problem affects the the whole complex.

Safety concerns are compounded by the fact that CCTV can not be installed because of the overhanging branches, putting at risk a number of residents, the oldest of which is 87.

Ellen Huggan, chairman of Glenrothes Sheltered Housing group said the problems were affecting all of the residents and that no organisation is prepared to take responsibility.

“The complex is 30 years old next year and as far as we understand there has been no proper assessment of the condition of surrounding woodland,” Ellen explained.

“Complaints go as far back as 2006 and every time someone responds, be it Fife Council, Woodland Trust or Greenbelt, we’re told it isn’t their responsibility.

“We have also been told that the trees are more important than the people, and that the wrong trees were planted when this part of town was designed 40 years ago. Someone must have a remit to deal with our concerns.”

Resident Ted Beare told the Gazette most people had to have lights on in the house throughout the day because the trees were obscuring natural light.

“It’s affecting our quality of life, we can not go on like this.”

Cllr John Wincott, who acts as Fife Council liaison with the Woodland Trust, met with residents this week, vowing to do what he could to ease residents concerns.