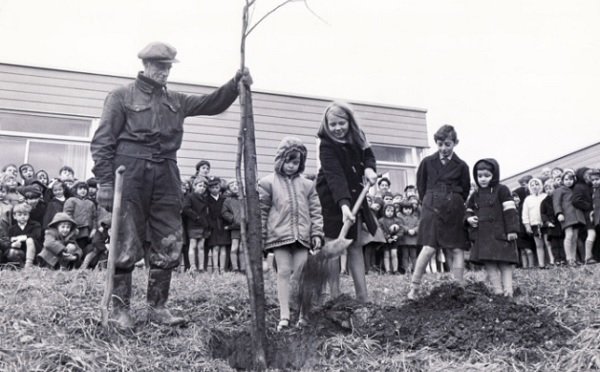 Nothing’s new under the sun, as they say, and that’s certainly the case with Sheffield’s long love affair with its trees.

Recent controversies over threats to roadside trees, ancient Smithy Wood near Chapeltown and trees in Gleadless Valley prompted this look back in The Star files.

As the pictures on these pages show, the popularity of Operation Springclean in 1969 was “almost an embarrassment”, said Sheffield recreation department manager Arrol Winning.

His staff were going to spend almost the whole of November planting more than 1,500 trees paid for by householders and organisations for their areas.

The Star got in on the act, launching what was described as “a cloud of balloons”, each bearing an acorn. The editor, Colin Brannigan, performed the launch from the roof of the building – and a lot of them got no further as they fell from the balloons.

The idea was for readers to plant the acorns and send their labels back to the paper, saying where they landed.

A year later, the operation was in full flow again, kicked off by the city Girls’ Brigade.

Inevitably, there were also stories in the early 1970s of vandals uprooting new trees, including 80 saplings on Herries Road near Wordsworth Avenue.

Those trees were provided by the Government’s Operation Eyesore campaign. Maybe someone – Mr Winning blamed “children” – thought they were one…

In 1972, David Blunkett, then a Southey Green ward councillor, proposed that people should be given trees to plant in gardens so that they would be better protected. The Tree Planting Week that year commemorated the 10th anniversary of the Great Gale that destroyed 10,000 mature trees.

In 1976, in what the paper labelled The Great Trees Debate, outraged citizens of Nether Edge threatened to chain themselves to trees to stop them being cut down.

Campaigner John Tyme said he was prepared to climb up a tree and sit in it to halt the work.

There were also fierce protests in Fulwood and Broomhilll.

The city council, working alongside the county council, wanted to fell mature trees where pavements and roads were under threat of damage and replace them with smaller ones.

Eventually, trees in Coverdale Road and elsewhere were lopped, rather than chopped down.

The issue was back on the agenda in 1996, when The Star ran a feature under the memorable headline, Nightmare on Elm Street.

A “shock report” from the council revealed that years of neglecting maintenance and safety inspections meant Sheffielders were in danger of injury from falls on root-damaged surfaces.

Geoff Kay, who lived at Western Road, Crookes, said pensioners were risking safety walking into the road as footpaths were so uneven.

Council leader Mike Bower admitted that the authority was taking risks in not doing the work around the city but blamed lack of resources.

Despite the problems, the city’s tree population was said to be in decline.