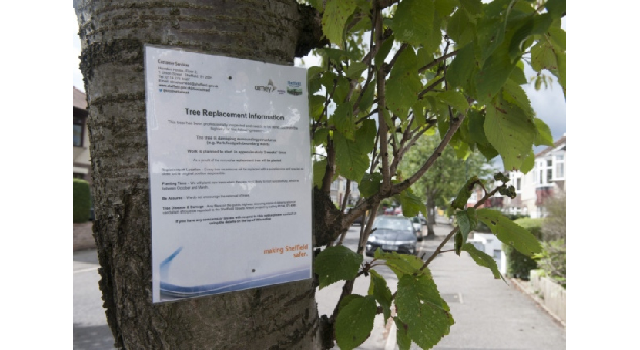 A new debate over felling Sheffield trees will take place tonight as the second meeting of a forum is held.

The hearing at Sheffield Town Hall, which takes place from 5pm to 7pm, is to discuss the council’s strategy on removing trees and ‘engineering solutions’.

In the past few months the issue of felling and replacing street trees with saplings has sparked widespread controversy.

A 13,000-strong petition, which aims to save 11 trees on Rustlings Road, near Endcliffe Park, from the axe and grew into a call for more scrutiny over the process, triggered a council debate and led to the forum being set up.

But the trees are still scheduled to be cut down, raising environmental and other concerns.

Residents have also launched campaigns in Heeley, Greenhill and Dore where trees are to be felled by council contractor Amey, as part of Streets Ahead work.

Campaigners are also set to take their questions and petitions to Sheffield Council’s first full meeting since the summer break, which takes place in the town hall from 2pm.

Louise Wilcockson, from the Save Our Rustlings Trees group, said campaigners were ‘still waiting for answers’ to questions asked at the last forum and for ‘inaccurate minutes’ to be amended.

They have also asked to see evidence of alternative proposals for the trees on the road considered by the council .

At the last forum it was announced the council is to develop a new tree strategy and campaigners want felling to be paused until it is adopted.

The council says trees are felled only as a ‘last resort’ when diseased, dying, causing damage or blocking access and they are all replaced.