Campaigners in Sheffield comes together to mark Armistice Day 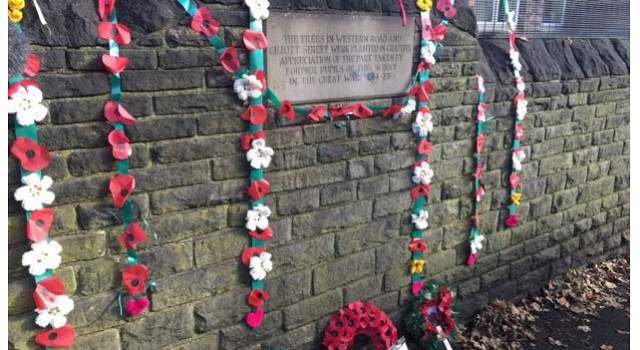 Campaigners against the controversial felling of trees on a Sheffield street which are listed as a war memorial have come together on Armistice Day.

More than 100 people gathered in Western Road, Crookes, for what they called a day of art and remembrance.

Artists are drawing or painting each tree on the road as part of the campaign.

The trees were planted on 4 April 1919 to mark the part former pupils of a local school played in World War One.

They are recognised by the War Memorials Trust and Imperial War Museum as a Living War Memorial, but 23 have been earmarked for replacement.

A memorial stone in a wall on the road reads: “The trees in Western Road and Gillott Street were planted in grateful appreciation of the part taken by former pupils of this school in the Great War 1914-1919”.

Sheffield City Council has said it will remove all trees which are diseased or dangerous, but many say these trees are healthy and should remain.

The council is undergoing a huge programme to resurface thousands of miles of Sheffield’s pothole-ridden road system.

As part of this, Amey is tasked with maintaining 36,000 roadside trees.

The contractor and council said the trees being removed are diseased or dangerous and all are being replaced – but protesters said the roots were merely getting in the way.

Saturday’s event is another part of a long dispute between the council and protesters who have tried to stop the felling of hundreds of trees.

The artworks created on Saturday will form part of an exhibition organised by campaigners on a date to be fixed.