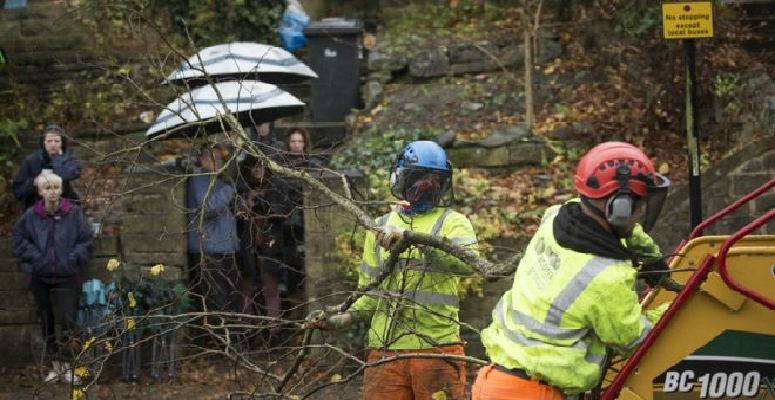 More than £413,000 has been spent by Sheffield City Council on legal costs proceedings against tree felling protesters, the BBC has learned.

Thousands of trees have been cut down under the council’s tree-felling and replacement contract since 2012.

Campaigners have staged a series of protests in a bid to stop them being cut down.

The council said it is due to get about £70,000 of the money back through reclaiming court costs.

The council’s legal costs £413,194.38 were revealed through a Freedom of Information request by BBC Radio Sheffield.

The protests stem from a dispute surrounding the 25-year, £2.2bn Streets Ahead contract between Sheffield City Council and Amey has seen about 5,500 trees cut down since 2012.

The authority, that is planting new trees after removing existing ones, insists trees earmarked for felling were diseased, dying, dangerous or damaging.

But campaigners argue many of the felled trees were healthy and have staged a series of protests in a bid to stop them being cut down.

Pulp frontman Jarvis Cocker spoke out in support of tree campaigners when hundreds marched through the city centre in opposition to the felling in April.

The council’s costs include a judicial review in 2016 into the legality of the programme, brought by tree protestor David Dillner, that the authority won at a cost of more than £100,000.

They also include the costs of an injunction, and its renewal, to stop protestors gathering inside safety barriers during tree felling.

Other costs came from committal hearings for various tree protestors.