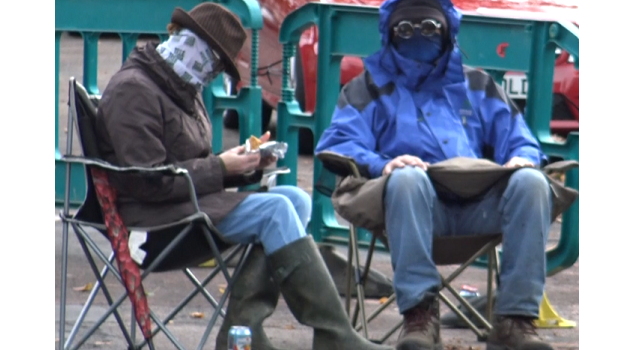 Two masked tree protesters have been captured on camera flouting a High Court order in Sheffield.

The long-running Sheffield felling saga took another twist this week after two people with covered faces entered ‘exclusion zones’ around trees set for the chop. The ‘exclusion zones’ are protected by a High Court injunction and is aimed to stop protesters obstructing council workers.

Council bosses called the move ‘disappointing and unacceptable’ and are set to press forward with ‘further court action and potential imprisonment’. The picture is understood to have been taken from Meersbrook Park Road.

Green councillor Alison Teal and Calvin Payne have received committal papers to attend Sheffield Magistrates’ Court for an alleged breach of this injunction. A video of a similar incident shows campaigners inside the boundary of Meersbrook Park and one of the exclusion zones at the same time.

Campaigners say the council have misinterpreted the injunction set out by Mr Justice Males which states a zone is ‘delineated by barriers erected on a public highway around a tree to be felled’.

The council says the felling and replacement of 6,000 of the city’s 36,000 street trees is necessary, but campaigners say there are ways to save healthy trees within the Streets Ahead contract.

Coun Bryan Lodge, cabinet member for environment and street scene at Sheffield City Council said: “Unfortunately, a very small number of tree activists are continuing to trespass inside the exclusion zone around tree works, despite a High Court ruling stating that anyone who did so is acting unlawfully and would be in contempt of court.

“The continued breach of the injunction is both disappointing and unacceptable and will now result in further court action and potential imprisonment for those involved. What’s more, this direct action is in complete disregard of the law and goes against the wishes of the majority of people in Sheffield who are in support of our work.

“We are aware that some activists are now entering into the exclusion zone in disguise, including wearing masks and hoods, to prevent them from being identified. This is a deliberate attempt, by individuals who know they are breaking the law, to evade the legal process and avoid being brought before court. Whilst this is frustrating and often intimidating for the workers, the Council is taking all necessary steps to ensure anyone, whether in disguise or not, is accountable for breaching the order imposed by a High Court judge.

“On-site signs which display the terms of the injunction can be seen on barriers across the city and so, those choosing to ignore the ruling are doing so at their own risk and with the knowledge that their actions will have serious consequences. Those taking direct action have had every opportunity to comply with the court rulings and furthermore, the Council has repeatedly reiterated its support of peaceful protest which can be done outside of the exclusion zone.

“Unfortunately, continued breaches of the injunction prevents us from completing the much needed upgrade of the city’s roads and pavements as well as the installation of new street lights which we know Sheffielders want. Furthermore, the programme has the full democratic backing of the council and the legal backing of the High Court.”