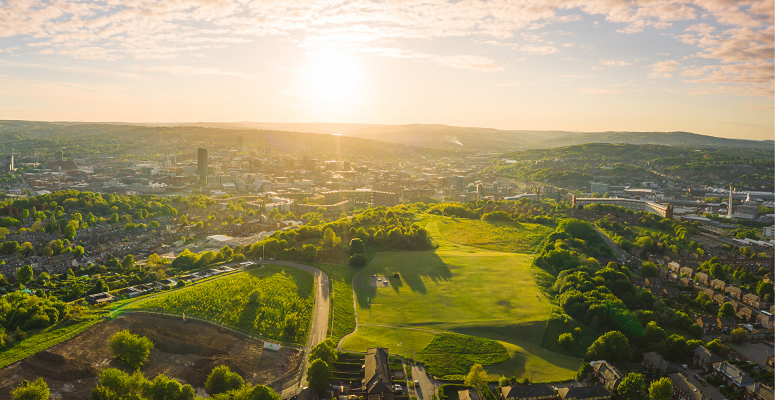 A recent report prepared on behalf of Sheffield City Council has established that tree density across the city is much higher than the UK average.

The report, prepared by Treeconomics and entitled simply ‘Sheffield’s Trees’, uses a sampling methodology outlined in the i-tree Eco V6 modelling tool, to provide a detailed analysis of the city’s urban forest.

It found that tree density across Sheffield is 105 trees per hectare. This is significantly higher than the average density of trees across London (53 trees/ ha) and the current UK average for towns and cities (58 trees/ha).  Roughly speaking, this equates to around seven trees per person. For London, this figure was calculated at one tree per person.

Over recent years, much has been written about the trees of Sheffield. In many ways, Sheffield and trees have become synonymous with headlines both favourable and unfavourable. This new report provides a detailed snapshot of Sheffield’s urban forest as it is today and provides the basis for detailed management plans to emerge.

Across Sheffield there are an estimated 3,863,630 trees over 7cm stem diameter. The trees that make up this urban forest are situated on both public and private property. Across the whole survey area, the report estimates that around 60% of trees are in public ownership and 39% in private ownership. By comparison, a similar study in Greater London was 43% public and 57% private ownership. Across the UK, USA, and Europe the average public: private split is around 40%-60% to 30%-70%.

The report also found that Sheffield’s trees alleviate 520,199m³ of storm water per year.  This is the equivalent of more than 202 Olympic-sized swimming pools.

The tree canopy cover of Sheffield is over 18% which compares very favourably with other study areas in the UK.

Kenton Rogers, co-founder of Treeconomics, commented: “This kind of data is crucial to inform management decisions around urban trees – with better data we can make better choices.”

The report also contains valuable information on the distribution of trees across the Sheffield area, the dominant species and the level of diversity. It also assesses the vulnerability of the population to pests and diseases.

Furthermore, the report provides a perspective for community engagement and involvement, based on evidence rather than sensational headlines.

Jerry Gunton, tree manager at Sheffield City Council, is excited about the new opportunities the report has opened up: “A big thanks to Treeconomics. It’s been a fantastic project and has become a cornerstone of our current tree management practices. It has also spawned many smaller research projects. It will be interesting to do it all again in a few years’ time!”