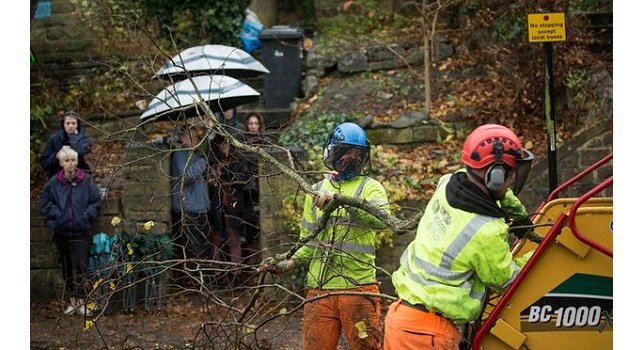 Campaigners are demanding that Sheffield council re-examine plans to cut down 23 trees planted in memory of a group of young soldiers, killed in the first world war, who attended a nearby primary school.

Sixty trees remain of the 96 that were originally planted in 1919, and the site remains a registered war memorial.

The council has recommended that 23 of the trees be chopped down as part of its ongoing Streets Ahead project, which campaigners say has already resulted in 4,000 trees being felled across the city.

The council claims that many of the city’s trees are diseased and that their roots have ruined pavements and roads. The 25-year private finance initiative (PFI) deal signed in 2012 with private contractor Amey promises to “see Sheffield’s roads transformed from some of the worst in the country to the best in the country”.

Spokespeople for the Sheffield Trees Action Group have described the plans as outrageous. “You don’t desecrate war memorials,” retired academic Alan Story, who is a spokesman for Western Road Remembers told the Sheffield Star, which has mounted a campaign to save the trees.

Karen Houtby lives on Rustlings Road, where three residents were arrested in the early hours of 17 November for attempting to stop tree surgeons contracted by Amey from chopping down trees on the street. Her seven-year-old son also attends Westways school.

“There’s a lot of anger and sadness about it all,” she said. “I think there’s a feeling that hopefully the council this time can’t ignore the fact that there is so much significance attached to those trees. Surely they’re going to have to listen now.”

The trees on Western Road have been adorned with poppies and yellow ribbons by residents, parents and pupils at the school. “The thing that has upset me more than anything is that people are not being listened to,” said Houtby. “It’s quite clear the residents don’t want this.”

A Sheffield city council spokesman said: “We are in the early stages of working with residents on Western Road to confirm which trees need to be replaced. No decisions have been made. There are 54 trees and our initial recommendations are that 23 need to be replaced.

“Every household has now been sent a survey asking their views on these proposals. If more than 50% of respondents disagree with the plans, we will refer the street to the independent tree panel for further investigation. We will work closely with residents and the War Memorials Trust to ensure any trees that are removed are replaced appropriately and sensitively.”

Today, two men will become the first of the city’s tree protesters to appear in court. So far five people have been arrested under section 241 of the Trade Union and Labour Relations (Consolidation) Act 1992, which criminalises anyone who persistently stops someone from carrying out lawful work.