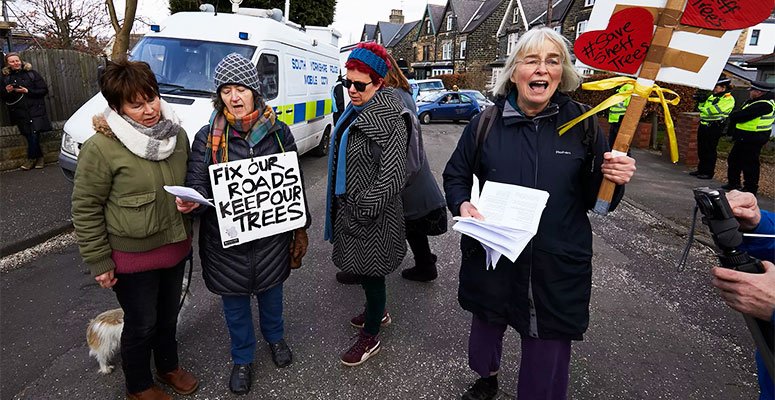 Sheffield council has proposed a deal under which fewer trees would be cut down as a result of its controversial road maintenance scheme, following a long-running dispute with campaigners.

The council paused the felling temporarily in March after dozens of protesters were arrested while attempting to stop trees being chopped down.

About 5,500 trees have so far been removed and replaced with saplings as part of a 25-year, £2.2bn private finance initiative deal with the contractor Amey. Under the agreement, which was signed by the Labour council in 2012, the company is tasked with maintaining the city’s roads and pavements, including its 36,000 roadside trees.

The council says Amey only removes trees if they are “dangerous, dying, diseased, dead, damaging” or their roots prevent wheelchair users and people pushing buggies from using pavements.

The protesters argue the company is chopping down healthy trees because they are more expensive and difficult to maintain than young saplings.

In a later statement, Dagnall said: “Sheffield city council and Amey have tabled a proposal to retain some of the 300 trees that had originally been earmarked for replacement, and phase the work on others. Amey has proposed to fund additional engineering solutions to make this possible at no additional cost to the council.

“We have also proposed that part of the way forward is for the council to develop a new street tree strategy for the city, co-produced with other stakeholders.” He said the council would give Stag a few weeks to scrutinise the proposals before opening them to a wider public consultation.

In a statement, Stag said: “Sheffield city council have made a statement on TV news indicating that they have a plan for future tree fellings but giving no details.

“Stag has been in confidential discussions with [Sheffield city council] over the past four weeks. We continue to explore possible plans with [the council] and are committed to doing everything we can to help resolve this painful dispute between citizens and council.”

The group added that it had no mandate to approve any plan put forward by the council and it was up to individual tree campaigners and groups whether they accepted the proposals.

In June, a freedom of information request by the Sunday Times found more than 110,000 trees had been cut down by councils across the UK since 2015. Newcastle topped the list, having felled 8,414 of its 800,000 trees in the previous three years.