Sheffield Council pay £700,000 in compensation over delays to tree-felling 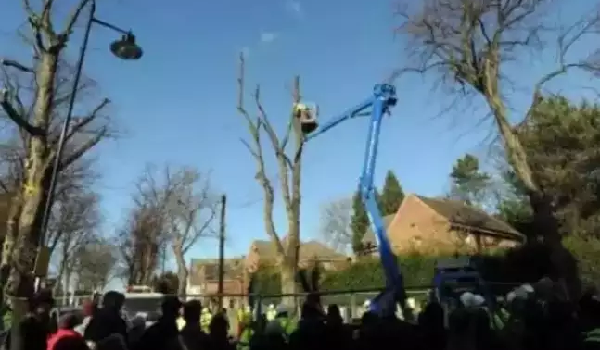 A council in England has been forced to pay £700,000 in compensation over the delays to its controversial tree-felling strategy, which campaigners claim is seeing healthy trees cut down unnecessarily.

Sheffield Council paid the money to its highways maintenance contractor Amey after the disruption in 2017 contributed to delays to works that needed to be completed on more than 300 streets. The details of the payment have been made public after the council responded to an FOI request by local tree campaigner Neil Meadows.

The delays were caused by the council’s decision to wait for verdict from the Independent Tree Panel, which had been set up to consult on its tree-felling strategy after local residents began to protest against the plans.

Last September it was revealed the “knock on” effects of this decision led to delay of highway works across hundreds of streets – despite the advice from the panel being ignored by the council in 75 percent of cases, which resulted in the authority felling trees against the panel’s advice.

The work is part of a 25-year PFI contract with Amey that started in 2012 and also involves road and pavement resurfacing work and the replacement of street lights.

The council had tried to claim in August it was facing “catastrophic financial consequences” because of protesters holding up tree-felling – only for it to subsequently be revealed that Amey rather than the council had to bear costs relating to demonstrations under the terms of the contract.

Work to remove thousands of street trees in the city and replace them with saplings has been on hold for more than two months following a national outcry against the policy after dozens of police officers and private security guards were sent to support operations in the wake of growing protests. But the policy has been controversial for several years, with campaigners arguing that healthy trees were being felled unnecessarily.

Last year was the final 12 months of the Core Investment Period relating to the first five years of the £2.2bn contract where the majority of work was due to be completed before the deal was supposed to move into a “maintenance” phase.

In November 2015, the council set up the Independent Tree Panel in the wake of concerns from campaigners. The process saw surveys sent out to residents living on affected streets and in instances where more than half of the residents raised objections about the proposals for trees, the plans were referred to the panel to make recommendations on whether felling should go ahead. The panel’s work came to an end in July 2017.

It was revealed last summer that on occasions where the panel had deemed trees could be saved, the council rejected the advice on 223 occasions and only accepted it 73 times – leading campaigners to describe it as a “sham consultation”.

The panel did agree with council proposals to remove a further 454 trees. The new FoI response by the council to Mr Meadows said: “The introduction of the Independent Tree Panel process by the council in 2016 triggered a Compensation Event under the terms of the Streets Ahead PFI contract as it caused delay to Amey’s programme.

Sheffield council in secret plot to chop down half the city’s trees  “At that point Amey estimated that the cost of this delay would be approximately £5m, adding onto the hefty £700k in compensation. These costs were calculated to include the work of an additional subcontractor to catch up with delays to the programme of works, caused by the introduction of the ITP process.

During 2017 the Council paid Amey £700k in compensation for delay costs and Amey undertook to re-programme works to mitigate all further costs associated with the delay.” In August last year, the council won a High Court injunction banning protesters from standing directly underneath threatened trees to prevent them being felled.

At the time, an official statement from the then-cabinet member for environment Bryan Lodge said court action had been a “last resort” that was needed to stop protests and “avoid catastrophic financial consequences if the Streets Ahead work is not completed by the end of the year”.