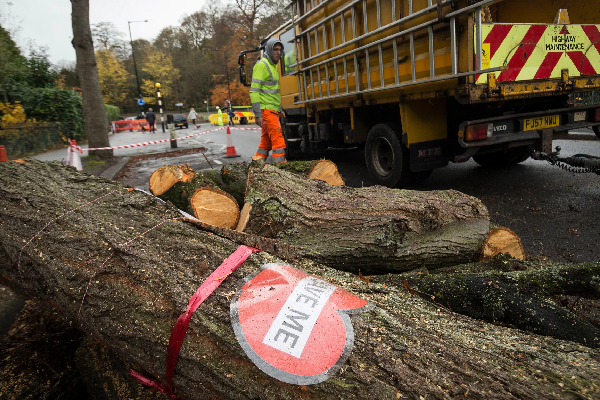 Judge seeks assurances that legal action was brought at behest of elected councillors. Tree protesters in Sheffield are being taken to court on the orders of the council leader, a judge has heard.

Labour’s Julie Dore, the leader since 2011, “positively agreed” with legal action against four Sheffield residents who were charged after demonstrating against plans to fell up to 17,000 trees, Sheffield high court heard.

Paul Brooke, Simon Crump, Benoit Benz Cumpin and Fran Grace could be sent to prison if they are found to have breached an injunction during protests in December and January.

Before the hearing began, the judge, Mr Justice Males, asked the council’s barrister to confirm that the case was being brought with the blessing of the council leader.

“This is a serious application. The council seeks to commit Sheffield citizens to prison for contempt,” said Males. He noted that judges, “like everybody else”, read newspapers and that he had read of a “moratorium” on tree felling, under which the chainsaws had fallen silent since March.

After a short adjournment, Yaaser Vanderman, the council’s barrister, said he had been assured that Dore “positively agreed that proceedings should be brought”.

Dore has only rarely spoken out about trees in recent months, and earlier in the year was filmed driving away from a BBC reporter, refusing to answer questions. In May’s council elections in Sheffield, Labour lost two seats to each of the Liberal Democrats and the Greens, and councillors accepted the tree saga had cost them votes in leafy areas.

If found guilty of the breach, the four protesters could be jailed or, more likely, could face a large legal bill.

Last year another protester, Calvin Payne, was found to have breached an injunction not to enter a “safety zone” around trees earmarked for the chop, and to have incited others on Facebook to follow his lead. He was given a suspended sentence and told to pay the council’s £16,000 legal costs, after the local authority instructed a prominent QC for a one-day hearing.

Local celebrities including Jarvis Cocker helped crowdfund the legal fees for Payne and another protester, who was handed an £11,000 bill for spending 10 minutes in a tree safety zone.

In August the city council obtained an injunction to stop protesters taking direct action against the felling of trees as part of a £2.2bn PFI deal to maintain Sheffield’s roads and pavements.

The council says its outsourcing company, Amey, removes trees only if they are “dangerous, dying, diseased, dead, damaging or discriminatory” – meaning they damage pavements and potentially obstruct disabled residents. But protesters accuse Amey of chopping down healthy trees because they are more costly and difficult to maintain than young saplings.

The environment minister, Michael Gove, has described the tree-felling programme as “bonkers”.

Two of the defendants in court on Tuesday – Brooke and Crump – had previously avoided legal sanctions after promising a judge they would not break the injunction.

Before the hearing, Laraine Manley, an executive director at Sheffield council, said: “Despite a high court injunction being in place to allow work on some street trees to continue safely, four more people have breached this ruling and are now facing court action. In addition, two of the individuals had previously signed an undertaking not to breach the injunction order.

“It is totally regrettable that we are in this position once again, but breaching the injunction is breaking the law, and we ask that people respect the high court judge’s ruling by remaining outside of our safety barriers.”

The court also heard that the “ultimate decision” to take the protesters to court was made by Gillian Duckworth, the council’s head of legal, a non-elected position. But Vanderman said Duckworth consulted Dore and “relevant council members” and “took their views into account.”

Yet last week on BBC Radio Sheffield, Dore’s council colleague Lewis Dagnall, the new cabinet member for environment, said he was “insulated from the legal process” and had no power to stop the cases being brought to court.