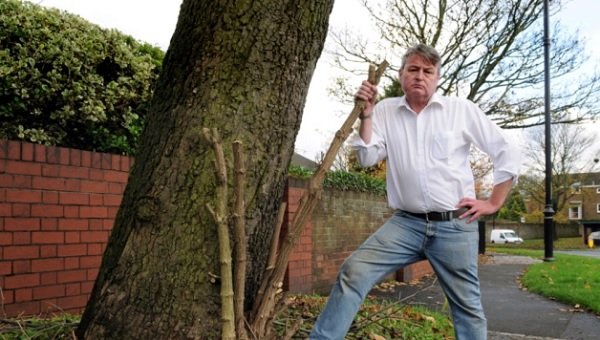 A tree in South Tyneside needs to be made safe before someone is injured, a councillor claims.

Coun Jeff Milburn says the tree, in Sunderland Road, Cleadon Village, could “have someone’s eye out” and needs to be cut back properly.

Sharp offshoots have sprung from the base of the tree, which is next to the pedestrian crossing opposite the Britannia Inn.

Coun Milburn believes it is an accident waiting to happen if the problem is not sorted soon.

The Cleadon and East Boldon Tory said: “These sharp branches are right next to a pedestrian crossing and they could cause someone a serious injury.

“They could easily be pranged by them, especially in the dark. It’s very dangerous. These branches could have someone’s eye out.

In recent days the branches have been cut back, but they are still unsafe, says Coun Milburn.

He said: “I think what’s happened is a fed-up resident has decided to take the matter into their own hands.

“They’ve probably been sick of being snagged by the overhang, but as a result, the branches left behind are rather sharp.

“The council really needs to come and make this safe.”

A spokesman for South Tyneside Council said that, now that it is are aware of the issue, the tree will be cut.

A spokesman added: “Now that the issue has been brought to our attention, we have arranged for the twigs to be cut back.”