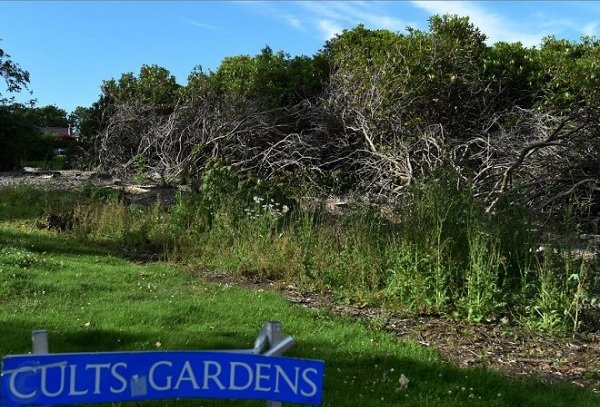 Shame-faced council chiefs have apologised “unreservedly” to the residents of a smart Aberdeen suburb after workers felled more than 30 historic trees on private land.

A letter has been sent to homes in Cults Gardens, admitting the blunder – and offering to plant new saplings in place of the ones that were chopped down.

One householder who tried to halt the work – ordered after the conifers were judged “unsafe” – is now organising a meeting of neighbours to discuss their response.

Lawyer David Rennie said Aberdeen City Council had left the area “a complete mess” and he was now considering legal action against the authority.

“They cut down a beautiful deciduous tree that was about 30-years-old that was in no more danger of falling over than the Eiffel Tower.”

Mr Rennie watched in horror as a squad of about a dozen council employees arrived to take down about 30 conifers which had been growing on amenity land co-owned by a number of residents in January this year.

Now, six months after the event, Aberdeen City Council arboricultural officer Richard Nicholson has written to him and his neighbours acknowledging the mistake and offering to replant the trees.

The letter reads: “The results of (our) investigations has revealed that the land is owned by numbers one to seven Cults Gardens.

“For the lack of consultation on the tree removals, I apologise unreservedly.

“Given my service is wholly in the wrong for cutting down the trees, I would like to offer to replant tree for tree, all trees felled. It would be my intention to do this immediately if residents are in favour and I would recommend replanting with quick-growing cypresses.”

Mr Rennie said the apology would have been more meaningful if it had been made sooner.

He said: “(The letter) is the only real communication we have had from the council.

“I was asking them to explain legally what they though their entitlement was and they never answered. What they eventually did was come back and say ‘oops, terribly sorry we acknowledge what we shouldn’t have done what we did’ and offering to replace the trees.

“Obviously the letter is conciliatory, so at least it’s a start to the process because before they were in denial.”

Mr Rennie said he would be getting together with neighbours to consider where to go next.

“I’ve already threatened the council that I might sue for compensation, how far we take it of course depends on what they offer,” he said.

“From our point of view it’s bad enough that they did it in the first place but they then refused to communicate with anyone about it, and thirdly there was never any explanation of what they were planning on doing thereafter.

“I’ve been pulling out weeds which have been proliferating the area since the trees were chopped down. It’s a disgrace.”

An Aberdeen City Council spokeswoman said: “The letter to residents of Cults Gardens explains why the council felled the trees in error and apologises for the removal of the trees unreservedly.

“The council also confirms that they will continue to consult with residents as to what happens next including the possibility of the council replacing the trees with quick growing cypresses.”