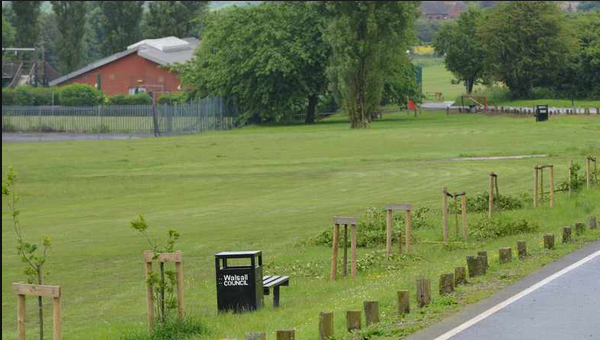 Seventy trees were destroyed, damaged or stolen in a vandal attack in Walsall it has emerged.

The trees were targeted at Aldridge Airport over the weekend and included some which had been planted by school children.

Yobs destroyed 20 street trees and then damaged or stole around 50 others put in by volunteers in a community orchard. The majority of which were stolen.

Officers from Walsall Council’s clean and green services have launched a clean up after the attack, which comes after a memorial tree to nine year-old Jamie Cartwright was vandalised.

He died from an infection caused by dust of building work inside Birmingham Children’s Hospital while receiving follow-up treatment after twice overcoming leukaemia. The tree was put in Walsall Arboretum in his memory.

More than 30 trees at Warley Woods Park in Smethwick also had bark stripped of their trunks using a knife last month.

Walsall Council received £24,000 from the Tree Council as part of its Big Tree Plant campaign to plant one million trees in England’s towns, cities and neighbourhoods by 2015.

Leisure and culture chief councillor Anthony Harris condemned those responsible. He said: “I just can’t understand why vandals would do this – ruining both the efforts of hard working volunteers and the environmental benefits that trees bring.

“We will reassess the trees that have been attacked at Aldridge Airport in the autumn and consider whether to replace them.

“In the meantime I would urge anyone with any information to pass this on to the police. Let’s get the culprits stopped.

“I really feel for those who have put in time and effort to plant the trees It is so sad that the selfish actions of a minority have spoilt things for Walsall’s communities in this way.”

Walsall’s Urban Forestry Strategy aims to increase the amount of woodland cover in the borough to at least the national average of about 12 per cent.

Planting new trees and woodland is also a target of the Birmingham and Black Country Nature Improvement Area.

Trees provide environmental benefits by bringing streets to life and attracting wildlife. They also shield houses from traffic noise, tackle the effects of air pollution and climate change and reduce the risk of flooding.