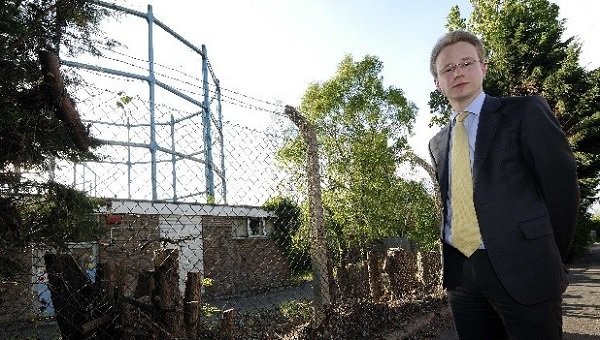 The mystery surrounding the felling of a row of trees at the Sevenoaks gasholders site has been solved five months on.

In March, about approximately a quarter of the mature trees which screened residents of Cramptons Road from the large structures were cut down without warning and neither the landowners nor their property agents admitted ordering it.

This week, fuel company Southern Gas Networks admitted it chopped down the row of conifers and poplars to create a new entrance to the site, just metres from the existing entrance.

A spokesman said: “I can confirm that Southern Gas Networks cut down the trees at the premises at Cramptons Road in Sevenoaks. The trees have been removed to create an entrance to the site.

“We acquired permission from the site owners, and were in consultation with the local council, prior to commencing the work. The trees which were cut down will be replaced with the entrance gates and surrounding fencing.”

The 0.59 acre site at 107 Cramptons Road is currently listed on the National Grid Property Portal website as available to let, on which it is described as ‘storage land with depot building’.

It has been earmarked as suitable for redevelopment into up to 40 new homes within a six to ten year period, and district councillor Matthew Dickins believes there is a link to the felling of the trees.

“I’m glad Southern Gas Networks has admitted they cut down the trees, but I don’t see why it has taken so long,” he said.

“In terms of the district council, no one I’ve spoken to is aware of being consulted about cutting the trees down.

“I’ve spoken with the county council – if they are creating an entrance to the site they would need to install dropped kerbs and there had been no request to do so. If they did make a request, it must have been retrospectively because it wasn’t done at the time.

“This is land that is a prime site for redevelopment. It will undoubtedly be developed into homes in the near future.

“What I want more than anything is better communication. We need greater relations between landowners, developers and the community. If you don’t have those relations, it’s not good for any party.

“It would have been useful if National Grid or Southern Gas Networks had communicated what they were going to do before the trees were cut down.

“Without that communication, it creates an air of suspicion. It raises the question why they have been so obtrusive and obstructive.”