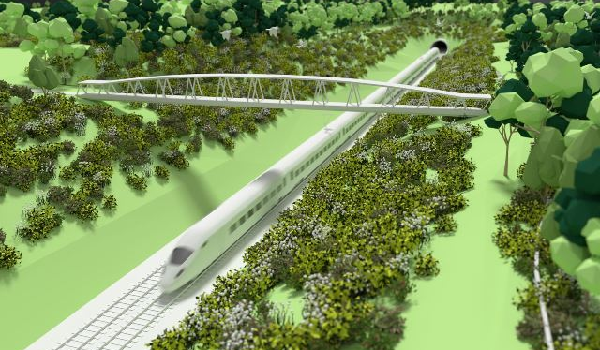 HS2 has set out plans to plant seven million new trees and shrubs along the 216km phase one route between London and Birmingham.

Bat houses and newt ponds will also line the route. The ‘green corridor’ plan, with new wildlife habitats, native woodlands and community spaces, is designed to lessen the ecological impact of the new high speed railway. Nearly a quarter of a million trees have already been planted.

Phase one will see the creation of about 10 square kilometres of new wildlife habitat – an increase of around 30% compared to what’s there now.

The government has also confirmed a £2m extension to the HS2 Woodland Fund, so it can cover Phase 2a of the railway, from the West Midlands to Crewe. The fund is designed to help landowners near to the route to restore existing and create new woodlands.

“This starts by doing everything we can to reduce our environmental footprint and minimise the expected impact of our construction work. Longer-term, we’ll be leaving behind a network of new wildlife habitats, woodlands, and community spaces, helping to create a lasting legacy along the route.”

He added: “We’ve already got to work by supporting a range of community projects and creating a series of new habitats, including planting over 230,000 trees so far. We’ll be calling on local people and organisations to get involved as the green corridor starts to take shape.”