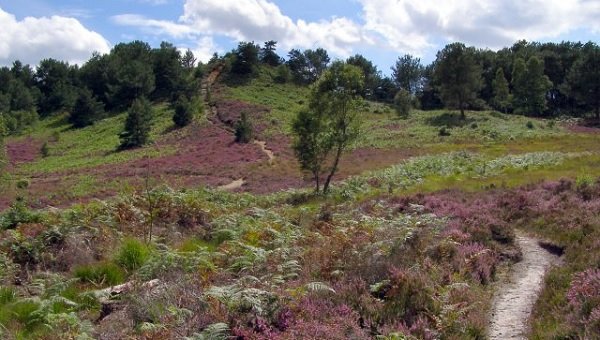 Following public consultation and the adoption of a ten-year management plan for the site, selective tree felling will take place at St Catherine’s Hill in Christchurch over the winter, starting on 10 November 2014.

Since the adoption of the management plan in October 2012 the Management Steering Group has been working on implementation of its action plan. Alongside the site managers – Christchurch Borough Council, Amphibian and Reptile Conservation Trust and Sembcorp Bournemouth Water – this group includes the main local organisations with an interest in the site, including West Christchurch Residents Association, Hurn Parish Council, Natural England and the Friends of St Catherine’s Hill.

The Forestry Commission granted licences for the selective tree felling in 2013 and works for winter 2013/14 were agreed but had to be delayed due to bad weather. It is now planned to carry out the works between 10 November 2014 and 31 March 2015.

Priority for the felling has been given to areas where early recovery is required to allow further work to take place, where trees are in poor condition or to enable later access to adjacent areas. Individual trees that the Steering Group feel should be retained at the moment have been marked with blue paint.

Although the plan runs for a 10 year period it was decided to apply for felling licences, at least initially, on an annual basis. This allows changes to the site to be more gradual and any potential impacts to be smaller and easier to remedy.

A hydrologist has been fully consulted to advise the site managers on any necessary mitigation or working methods to minimise potential impacts. Drainage monitoring is also in place to ensure this is achieved in practice.

Selected trees will be felled and then taken to a nearby location for chipping. To minimise vehicle size, vehicle movements and burning on site, all parts of the trees will be chipped using a large mobile chipping unit. The only exceptions are where chipper access is not possible, in the two north western blocks.

Robin Harley, Countryside Officer at Christchurch Council, said: “The chipping operation will generate some noise which is likely to be the main impact on local residents and we apologise in advance for any disturbance caused. To reduce its effects, chipping will not take place every day but only once sufficient material has been generated.

“Whilst we aim to minimise disturbance to site users and local residents, it will be necessary to close off individual blocks during the operations to ensure public safety.”

Costs will be largely met through grant funding through Higher Level Stewardship agreements with Natural England.