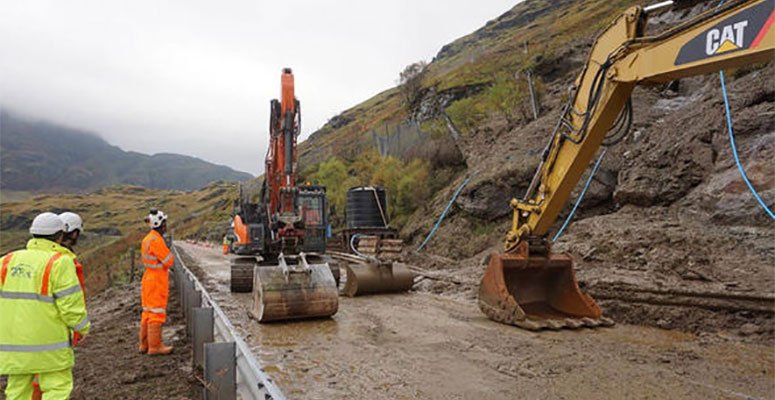 After the latest landslides at the Rest and Be Thankful, questions are being asked over why a scheme to plant trees above the road has been held up for six years. Drivers are facing diversions after the A83 at the beauty spot, in Argyll, remained closed over the weekend following fresh landslips brought on by heavy rain

The motorists have been forced to take a 60-mile detour since Tuesday when 2,500 tonnes of debris tumbled down Ben Luibhean blocking the main road and the Old Military Road which is normally used as a relief route.

However, after another 300 tonnes of debris on the A83 and another 50 tonnes on the old road came down on Friday, there is no quick solution for the ongoing access issue.

Three huge boulders – including one weighing 75 tonnes – which were trapped in the steel catch fences on the mountain earlier on in the week have been secured by engineers but difficult conditions brought on by Storm Callum hampered further clearance efforts.

Forestry Commission Scotland (FCS) and Transport Scotland are planning to plant 500 acres of native broadleaf trees and shrubs on the slopes above the A83 to reduce erosion and increase stability.

The Rest and Be Thankful Woodland Creation Project was approved in August after a public consultation and the planting of up to 250,000 trees is scheduled to start in 2020.

However, work cannot begin until the land is purchased from the current owner, who uses the barren slopes for rough sheep grazing.

Even then, it will be at least 15 years before the new forest starts to reduce landslides in the steep-sided mountain pass between Tarbert and Arrochar.

The project was first put forward in 2012 in a report for FCS by Bill Raynor and Bruce Nicoll of Forest Research in Edinburgh.

They said it would not be possible to plant quick-growing conifers in such a windy location and suggested reintroducing a mix of native species that would have covered the slopes before they were cleared for sheep grazing.

In the same year, a report by Transport Scotland concluded that “low-height broadleaf trees and shrubs” should be planted alongside other measures such as deer fences and engineering work.

As well as the land ownership issue, the impact on golden eagles, black grouse and badgers and concerns from hikers and mountaineers have also complicated matters since then.

The SNP Government has focused instead on opening the relief route and has spent £10million on measures such as netting, drainage and road safety works.

Despite this massive outlay, the road has been closed on dozens of occasions causing long delays for motorists and the emergency services and damaging the rural economy of Argyll.

Jamie Greene, Scottish Conservative transport spokesman, said the landslips caused “enormous disruption and inconvenience for everyone in the local area” and added: “While clearly a previous attempt has been made to prevent this kind of landslip, it has not worked.

“There are questions to be asked about why an alternative approach that was suggested in 2012 has not been tried.

“If tree planting is the best solution, as suggested in this document, then we may have simply wasted 6 years.”

A Transport Scotland spokesman said: “The plan to plant trees above the A83 Rest and Be Thankful to help mitigate landslips cannot begin until the complex land purchase process is complete and the necessary planning permission is in place. Transport Scotland has been working closely with the existing landowner and partner agencies and it is hoped these will be finalised in the near future, allowing preparatory works to begin in the new year.

“Work has already begun on a further £2m worth of additional mitigation measures, including the construction of road side catch pits.

“These measures, which were agreed with the A83 Taskforce, will help improve the resilience of the A83 and help keep Argyll open for business.”