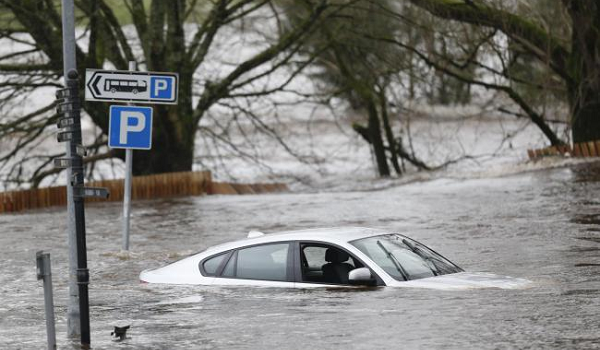 Scotland’s four largest cities must improve coastal defences and should consider planting thousands of trees to combat the effects of climate change by 2050, according to a new report.

People living in most of the world’s cities face problems caused by rising temperatures including heatwaves, flooding, water shortages and blackouts by mid-century without urgent action to curb greenhouse gases.

It is “the future that nobody wants” warns the study by C40 Cities, a group of cities taking action on climate change, the Global Covenant of Mayors, the Urban Climate Change Research Network and climate advisory company Acclimatise.

But authorities in cities around the world are taking steps to protect their citizens from the impacts of climate change, the study said. Rising sea levels, storm surges and more rain mean Glasgow, Edinburgh, Aberdeen and Dundee face the threat of tidal, river and flash flooding which the government must combat.

They are also vulnerable to overheating and drought-like conditions, while hotter summers increase demand for air conditioning and puts more pressure on energy supplies.

UK power plants supplying Scotland are predominantly located around the coast and are vulnerable to flooding which could lead to blackouts, while electricity substations in the cities are also at risk of local floods, the report said.

Forecasts suggest that sea levels around Scotland will increase by between 6.5inches (16.5cm) and 11inches (28 cm) by 2050, while average temperatures will rise by 2.8C in summer and 2.2C in winter.

During the same time frame the amount of rainfall will increase by 16 percent in winter and fall by 13 percent in summer, leading to a greater risk of forest and grassland fires near some sites.

“Now we have the clearest possible evidence of just what these impacts will mean for the citizens of the world’s cities. This is the future that nobody wants. Our research should serve as a wake-up call on just how urgently we need to be delivering bold climate action to combat the global affects of climate change.”

Actions cities around the world are taking to address climate change include planting 16 million trees and expanding green areas in Seoul, South Korea and improving coastal defences in New York. It comes as experts warn that dozens of Scotland’s world-famous historical sites are at risk from climate change.

Historic Environment Scotland (HES) said more than half of the 352 sites it administers are now in danger from the effects of extreme weather, with 28 listed as “high risk”.

These include the vast Fort George fortress near Inverness, the 800-year-old Inchcolm abbey and Inchcolm island on the Firth of Forth, and the Brough of Birsay, a Pictish and Viking-settled island in Orkney’s world heritage site.

The report warns: “Although these properties are often by their very nature resilient to threats like flooding, climate change is altering the environmental parameters in which they function, meaning that some sites are exposed to new hazards or increased risk from existing hazards.”