Scientists Peek Into The Hidden World Of Tree Roots 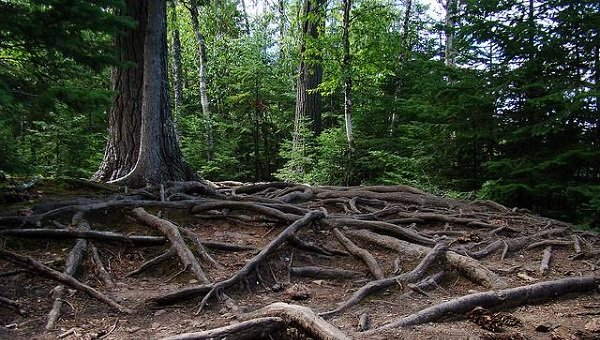 When you think of a tree, you probably think of the trunk and all those parts you see above ground. But there’s a whole lot more going on under the soil than meets the eye. Scientists are now digging into the hidden world of tree roots in an effort to illuminate some unexplained mysteries.

“This is something really weird. This is something like a mystery for forest ecologists,” says tree scientist Dr. Nalini Nadkarni. She’s standing in front of a strange looking tree stump in Olympia near the Capitol Building. It’s been cut off about a foot above the ground. On the top, you’d expect to see a flat surface covered in tree rings. “But this stump is different,” Nadkarni says. “It’s sort of scabbed over completely with thick bark.”

Bark needs a living tree to grow. So, somehow, this long-dead stump has found a way to produce new living tissue. Scientists like Nadkarni believe the secret lies under our feet. Down there, hidden under the surface, lies a vast network of tree roots. These networks are often called neighborhoods.

“They really are sort of like neighborhoods,” Nadkarni says. “I have neighbors, and I communicate with them. I borrow sugar from them. Well, trees are really the same way.”

Tree roots can leak out sugars and other compounds into the soil. Those sugars are then sucked up by neighboring roots. “So it’s literally exchanging sugar just like I do in the neighborhood,” Nadkarni laughs.

Tree roots can also share nutrients with far-away neighbors by transporting them across thin threads of fungi. These threads, called fungal hyphae, spread through the soil like giant underground spider webs. They penetrate the roots of neighboring trees, creating pathways that exchange hormones and other material. Very little is known about the role of fungal hyphae in Northwest forests, which is one reason Nadkarni calls soil one of the “last biotic frontiers.”

But fungi can’t account for the mysterious stump in downtown Olympia. To explain that Nadkarni points to something called root grafting. It happens when tree roots rub against each other and physically fuse together. When this occurs, neighboring trees – even different species – share one big circulatory system.

“It’s like connecting blood vessels of two different people. One tree gives the other tree a permanent transfusion,” Nadkarni says. “That’s exactly what happened with this cut-off stump. The neighboring tree that had grafted its roots to it continued to provide minerals and nutrients.”

But there’s also a downside to this kind of life-support system. Trees can also transfer diseases to their neighbors; sometimes to catastrophic effect. This leaves scientists wondering why exactly trees do this.

“There are a million questions that remain to be answered,” Nadkarni says, “And they’re still cloaked in this mystery of the soil.”


Peering Into The Underground World

Scientists like Dylan Fisher are beginning to crack open that mystery. Fisher works in the Ecosystem Ecology Lab at Evergreen State College. The lab is a jumble of high- and low-tech equipment: satellite images and specialty microscopes sit next to muddy shovels and duct tape.

“One of the things we’ve learned a lot about is how individual tree growth can be affected by who its neighbors are,” Fisher says. But he admits that when it comes to understanding the underground world of tree roots, there are still more questions than answers.

Then Fisher holds up a black cylinder, which he hopes will unlock some of those questions. “It looks like a modified light saber from a Star Wars movie,” he says. The tool is called a minirhizotron camera. It’s made from souped-up parts from a home desktop scanner. It’s designed to give scientists a clearer picture of what’s going on under the soil.

To see how it works Fisher heads out into the Evergreen College Forest Reserve. He scrambles over mossy logs and pushes aside shoulder-high sword ferns. He’s searching for a buried tube. Fisher has buried 44 of them here. At last, he spots one.

“It’s a clear plastic tube that goes down into the soil sometimes as far as a meter,” Fisher explains. “We can put a scanner down there and take a picture.”

He slides the black scanner into the tube. A few moments later, a picture pops onto his laptop. “Voila!” He cries. “There’s our image below ground.”

The image shows hundreds of tiny roots crisscrossing each other. Fisher points to a whitish root on the screen. “Here we’re looking at the big leaf maple, and then the Douglas fir roots are going to look a little bit darker in character.”

Dylan takes a new picture at this location every month. Each root, there are about 250, gets its own name. The roots are then monitored over time to see how they interact with each other.

A New Way Of Thinking About Trees

These images are shedding light on a little-understood aspect of Northwest forests: almost all trees are connected in some way at the root level. “Trees are horribly intermingled,” Fisher says. He points to the example of cottonwood trees. “Below ground, they’re connected by a network of large roots that make them one genetic individual. You can think of a trunk as really fingertips on a buried hand.” So what looks like a whole forest is really just one single, sprawling organism.

Scientists are also beginning to get a clearer picture of how just how active roots are under the soil. “More than 50 percent, or even as high as 70 percent, of that tree’s energy may go into what goes on below ground,” Fisher says. “So, literally, when you’re looking at a tree, you’re only seeing the tip of the iceberg.”
Back at the Capitol Campus in Olympia, Nadkarni stares up at a towering Douglas fir tree. She says this kind of research has given her a new way of thinking about trees. “When I took forestry way back in my undergraduate days, I was taught that a tree is a single, solitary entity. But we know now that’s not all the story. You can’t just see a tree as a stand-alone character anymore.”

So next time you find yourself on a hike in the forest, take a moment to consider the hidden world of roots just under your feet.