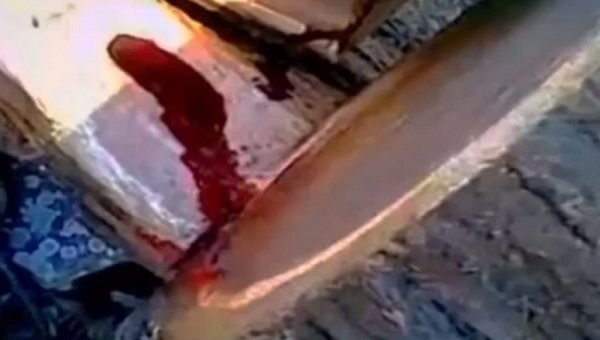 If you’ve ever wondered whether a tree cab actually bleed when you cut in to them, then this may answer your question.

The phenomenon of the ‘bleeding’ tree – in which a mysterious red liquid pours from chopped-down trunks – is one which has left scientists shocked and tree surgeons baffled,

But if the footage on BBC Two’s documentary series Nature’s Weirdest Events – currently being given a well-deserved repeat – is anything to go by, it may happen more often than you think.

Australian Chris Wharton was among those who revealed their shock at seeing a tree apparently pouring blood after he had cut it down, admitting he had ‘the shock of his life’.

‘I do not understand why this tree has apparently blood pumping out of it,’ he said, ‘It was the strangest thing.’

And presenter Chris Packham added that it was by no means an isolated incident, with reports of ‘bleeding trees’ occurring across the world and everything from disease to ‘the supernatural’ being blamed.

The good news is that there does seem to be an explanation for the weird goings-on – with rising sap in the springtime apparently responsible.

‘The sap is at high pressure until the leaves open and begin to evaporate the water, any injury releases this pressure,’ Packham explained.

‘This apparent ‘bleeding’ can look distressing, but it may be the tree’;s way of trying to heal.’

Nature’s Weirdest Events is on BBC Two from 8pm.