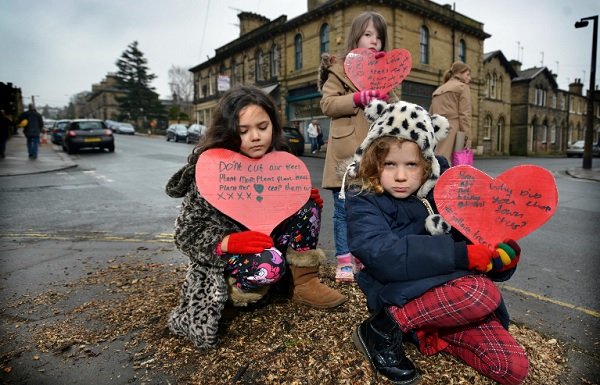 Saltaire residents unhappy with the felling of trees in the village gathered to write love letters to the recently departed foliage.

Earlier this month 32 trees along Victoria Road were removed as part of the Council’s public realm strategy.

A consultation with residents of the road found that 71 per cent of the road’s residents wanted the existing trees removed, although 31 per cent wanted them replaced with more suitable trees.

But since the works started, anger has grown in the village as to how the consultation was carried out.

On Valentine’s Day, a group of residents got together to hand out heart shaped pieces of cardboard that anyone who missed the trees could write messages on. Many were written by children, with one saying: “Saltaire has lost its soul” and another: “Gone but not forgotten, bring them back.”

There was also a reading of Dr Seuss’s environmental classic The Lorax in Saltaire bookshop later in the day.

The council has said that the works would return the street to the condition it was before they were planted in the 1950s.

Saltaire resident Jackie Mulligan said: “We are not campaigning types, but we wanted to let people know that we were not happy with what has happened. From all the conversations I’ve had, people in the village have very strong feelings about this.”

Referring to the fact that a council commissioned tree survey found most of the trees would likely have to be cut down in 40 years anyway, she added: “It is like a doctor saying he won’t treat someone because they will die in a few decades anyway. This is like Logan’s Run for trees.”