Safety fears over tree nobody is willing to cut down 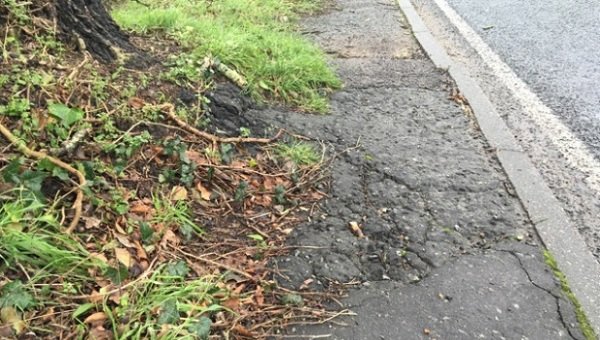 A homeowner from Ashington says bureaucracy is allowing a tree near his home to damage the pavement and endanger power lines.

He thought reporting the pavement damage to the council would be enough to get it dealt with.

The tree’s roots are breaking through the surface of the footway and making it a hazard for pedestrians, particularly after dark.

“You can’t take a pushchair over it,” said Mr Froud, adding that there is no way around the damaged area without stepping out into the road.

The tree also has four power lines touching its branches.

“After three or four months waiting for action to be done, the council have come back and said it isn’t their problem,” he said.

Neither the council nor UKPN is prepared to do anything as they do not own the tree. In fact, WSCC say the tree is on a narrow strip of ‘no man’s land’ – land which is unregistered and therefore does not belong to any known individual.

This often happens when land has been bought by a property developer to build houses on. Any sections of land not sold as part of a home will continue to be a possession of the company.

If the company later ceases trading, the land is likely to revert to the Crown. However, the Crown will not accept liability for anything that happens on that land, or for any work that needs to be done on it.

Mr Froud said he and a neighbour are each willing to pay for a quarter of the cost of having the tree removed, if UKPN and/or the council will cover the rest.

“My niggling point is that the situation is only going to get worse,” he said, adding that his home was left without electricity for nine hours after a smaller nearby tree fell onto overhead power lines.

He also said he’d be willing to take ownership of the tree and have it removed himself, were it not for the fact that he would then be liable for the existing damage to the footway.

A spokesman for West Sussex County Council said: “We have done all the work that was needed in respect of Health and Safety.

“It is not a Highways tree and is not on our land. As far as we are concerned it is safe.”

A statement from UK Power Networks said: “UK Power Networks has inspected the power line in Billingshurst Road, Ashington, and plans to install covered conductors to maintain safe and reliable electricity supplies for our customers.

“We do not need to remove the tree to ensure reliable supplies, however we can turn the power off temporarily to enable a third party to safely remove the tree if that is desired.”