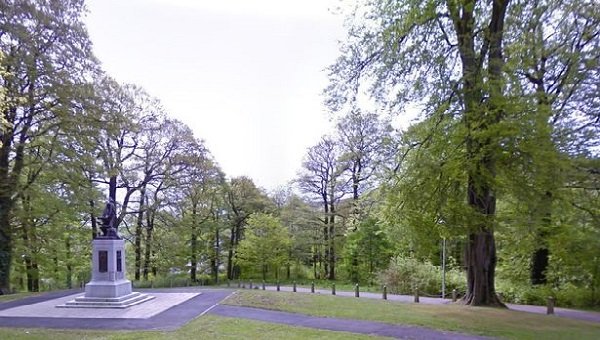 A 170-year-old beech tree near a public war memorial in Mountain Ash is being pulled down due to safety concerns.

The huge tree, at Dyffryn Woods off Mill Road, has recently been examined by specialists, who determined it needs to be felled because it could be a risk to members of the public, after contracting a fungus.

Mountain Ash East councillor Pauline Jarman, said local people have contacted her with concerns about the tree being removed, but says she has been assured it is the safest course of action. She said: “The tree was examined by a tree specialist and was found to be in rapid decline as a consequence of contracting a terminal fungus.

“I was advised that the only course of action, in the interest of public safety, was for it to be felled.

“Dyffryn Woods is an ancient woodland, the war memorial and Gorsedd stone circle are located there and this tree was the focus of attention because it was the only tree in the perimeter of the war memorial site.

“The tree features in many family and wedding photographs as a backdrop to those special events.

“During the course of the work, I had many people contact me concerned that the tree was being chopped down.

“This woodland is the jewel in the crown of Mountain Ash and people are very attached to the woodland and all it represents – peace, tranquility and a place to reflect in when walking your dog or visiting the memorial.”

Coun Jarman added that the contractor for the tree’s removal allowed residents to take some of the timber for their own use. Meanwhile, various objects were found within the tree itself, making it more difficult to be brought down.

She added: “The contractors did tell me that he had broken several chainsaw blades because the tree trunk had some metal and stones embedded in it at various heights.

“Apparently, the tree just embraced any foreign objects placed in it during its life.”