Sadness as 40 trees axed to make way for leisure centre 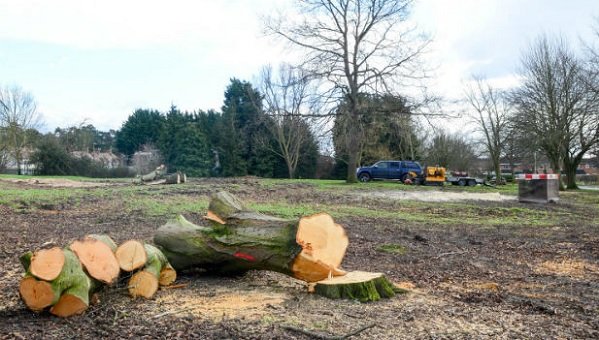 Tewkesbury Borough Council is under fire for chopping down dozens of mature trees to make way for its new leisure centre.

Workers preparing the way for the council’s new £7.5 million centre have felled 40 trees. They were in the grounds of the council offices, off Gloucester Road, where building work on the new facility is due to start on Monday.

The council insists that it has not acted without thinking carefully about the environment and says 30 of the trees will be replaced with new ones.

But that will leave 10 fewer trees in the area and has not placated some residents who are angry at the loss of the mature trees. They were mountain ash, silver birch, oak, leylandii and cherry trees and most were planted around 1974 when the council offices were built.

Heide Stansfield said: “I know the new leisure centre will most likely be good but I hate that they are chopping loads of trees down.”

She added that it was not just the loss of the trees themselves that concerned her but the effect it would have on wildlife too.

Sharon Bean said: “I felt really sad going past as they chopped them down.”

And Janet Livesey asked: “Can’t they build the leisure centre where they are intending to re-plant trees?”

Three of the axed trees had been dedicated to particular causes and were known as memorial trees.

After requests from councillors, they were chosen to honour the Royal British Legion’s 75th anniversary, the end of the First World War and service men and women who served Britain in Iraq.

The council’s lead member for health and wellbeing, Councillor Claire Wright (C, Tewkesbury Prior’s Park) said: “It is with regret that we have had to remove a number of trees from the site of the new leisure centre. We had no other option than to remove them as they were located where the new centre is going to be built.

“As part of the landscaping of the new centre, we will be planting an additional 30 trees and creating a new memorial area so that the council’s memorial trees can be re-sited together in one place, which will be easily accessible to the public. A re-dedication event will also be planned.

“The removal of the trees has been a necessary step so that we can begin building both an important and exciting new leisure facility for all of the borough to enjoy.”

The council added that the reason there would be a net reduction of 10 trees was because there would be less space available once two new roads had been built – one to serve the council offices and one leading to the leisure centre.

Wilmott Dixon is to build the new centre, which is due to open in July 2016.

It will be run and managed by Places for People Leisure, a social enterprise with a successful track record of managing more than 100 local authority leisure facilities across the country for nearly 25 years.