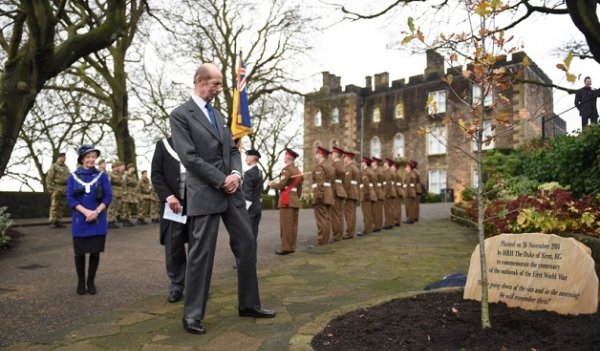 A royal seal of approval was given to an ambitious scheme to plant oak trees in Ribble Valley’s 35 parishes.

His Royal Highness The Duke of Kent planted the final tree at Clitheroe Castle to remember those from the borough who lived, fought and died in the First World War.

The Mayor said: “I am delighted that so many parishes have supported the tree-planting campaign and helped to create a ‘living’ memorial to the borough’s brave young men and their loved ones.

“I am particularly delighted that this successfully community campaign was completed by The Duke of Kent, a former professional soldier and honorary Field Marshal, who remains the Royal Colonel of a number of well-known regiments.

He added: “Before leaving, His Royal Highness told me he had thoroughly enjoyed his visit to Ribble Valley.”

After planting the tree, His Royal Highness unveiled a stone plaque donated by Waddington Fell Quarry featuring an inscription handcrafted by the quarry’s stone manager, Gary Devine, commemorating the centenary of the outbreak of the First World War, as well as a section from Laurence Binyon’s iconic poem, Ode of Remembrance.

The trees, bearing plaques in memory of the hundreds of young Ribble Valley men who lost their lives, have been planted at 41 sites across the borough throughout the year with some parishes receiving more than one tree.