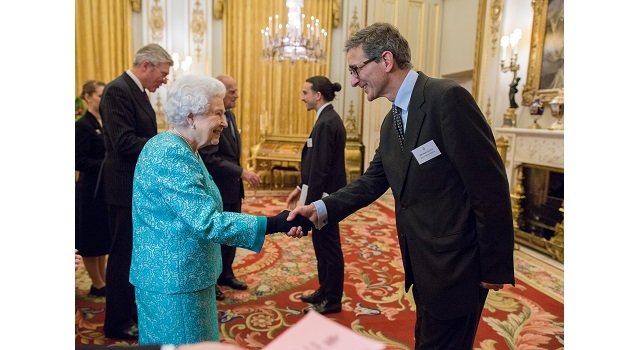 The Royal Forestry Society (RFS) has extended a warm welcome to the Queen’s Commonwealth Canopy (QCC) which aims to create a global network of protected Commonwealth forests.

At a Buckingham Palace reception hosted by Her Majesty The Queen and The Duke of Edinburgh, the Queen presented Certificates of QCC Partnership to the 20 Commonwealth countries who have committed to the initiative.

RFS Chief Executive Simon Lloyd, who represented the RFS at the reception, said: “ We welcome the QCC initiative as an important contribution to efforts to raise awareness of the unique value of trees and forests to our natural environment. We look forward to exploring the potential for the RFS to support the initiative.”

Those attending the reception heard Sir David Attenborough say: “A recent Yale University Study estimated that there are now about three trillion trees on Earth but we are removing about 15 billion a year with only five billion being planted back.

“Preserving the world’s green corridors, forests, jungles and botanic gardens is the simplest and most effective way to keep breathing life into planet earth.

“I do believe that we have an obligation to nurture and replenish our natural environment for the benefit of our children and grandchildren.”

The project is the brainchild of Labour MP Frank Field and was launched at the Commonwealth Heads of Government Meeting last year in Malta. Organisers hope to have all the Commonwealth nations involved by the next gathering of Commonwealth leaders in 2018.

More details can be found at http://queenscommonwealthcanopy.org/ .