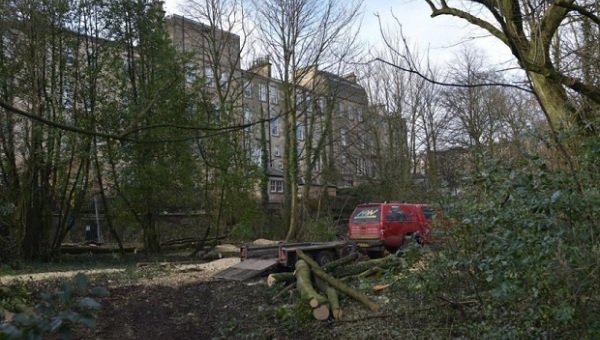 A row has broken out after campaigners accused developers of “vandalising” woodlands in a conservation area at one of Glasgow’s most prestigious addresses.

The dispute centres on proposals to build a block of 98 flats on a heritage site near Kelvingrove Park.

Leeds-based Expresso Property this week began felling trees on the site, including some believed to be around 200 years old.

The work was carried out during site investigations on vacant ground at the A-listed Park Quadrant in the city’s west end, in advance of a formal application for planning permission being lodged.

But protesters have said such a move is “almost unheard of” and insist the work should be halted. They claim Expresso Property should not be allowed to remove the trees as it does not yet own the site.

Members of the Park and Woodlands Heritage Group (PAWH) are calling for an investigation into the council’s handling of the deal.

The authority agreed to sell the land to Expresso last year for £6.3 million.

The proposed scheme will complete the row of houses originally planned in the Victorian development, which was left unfinished.

A Glasgow City Council spokesman confirmed no tree protection orders were in place and Expresso had been permitted to cut down a “limited number” of trees as part of site inspections.

However, he said the firm had been ordered to suspend felling until further checks were carried out.

Ms White said: “I think Glasgow City Council should be made to explain why this application appears to have been treated differently from others.”

A spokesman for PAWH said: “The developer is clearly intent on clearing the site as a way of forcing the council’s hand over planning permission for its block of flats.

“This is nothing less than an act of vandalism by an absentee developer, sitting in an office in Leeds, who cares more about profit than about Glasgow’s history and built heritage.”