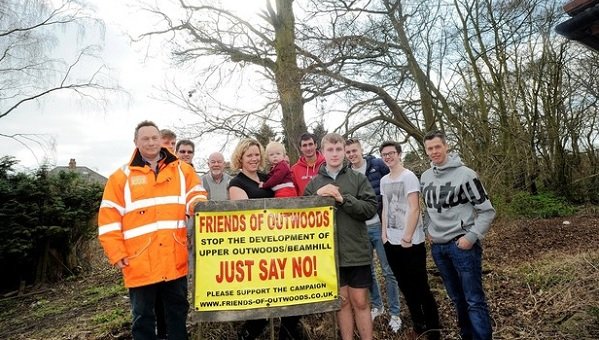 Plans to cut down a tree in Burton have led to a rally by campaigners wanting to save it.

Outwoods Parish Council and campaign group the Friends of Outwoods are opposing plans to remove the mature oak at the back of a property in Henhurst Hill.

Roy West, who lives there, is seeking approval to fell the tree, which is rooted on land owned by Henhurst and District Recreation Club.

He said the tree roots were restricting access to a field at the back of the road.

John Anderson, of Friends of Outwoods, has written an objection letter to the proposal on behalf of members of the Henhurst Club and organised a small rally to show support to keep the tree from being felled.

He told the Mail: “There is no good reason to move the tree.

“It is a mature oak tree that could be 100 years old and it should be protected.

“It is the principle. We cannot have a world without trees and we cannot keep cutting them down.

“This tree is on the property of the club and no permission has or will be granted for its destruction [by the club].”

Outwoods Parish Council has also voiced concerns about the proposals.

Chairman Ambrose Foy said: “A replacement would take another 100 years before the local people would see the likes of it again. It would be a real shame on the parish if we did not prevent the tree roots being damaged or being felled.”

Mr West, 58, said he has offered to plant replacement trees.

He added: “I don’t want to have to chop the tree down and if they say we can go over the roots to gain access to the field then we will try to work around it.”

The plans are being considered by East Staffordshire Borough Council.