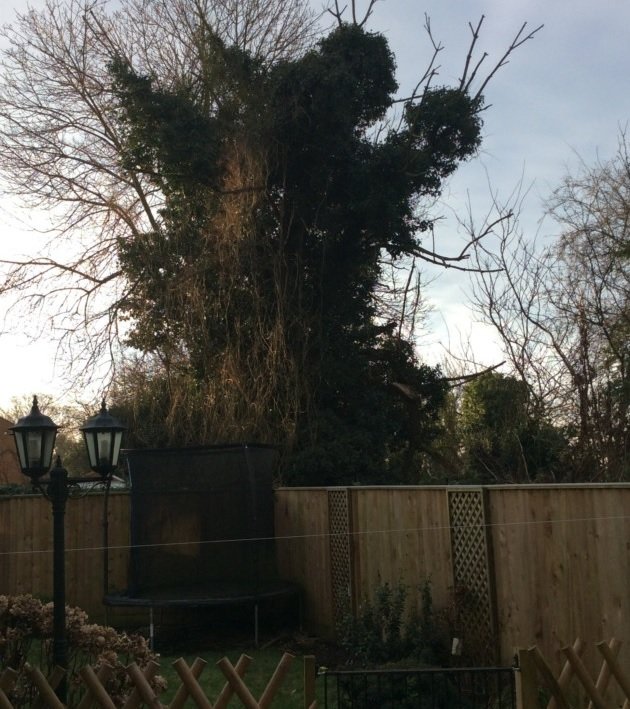 Residents and local councillors have called on the tree on Wales Bank, Elm, to be chopped down as they believe it the diseased elm could fall on their homes on Peartree Way.

But the tree is still standing as the owners of the land on which it stands have not yet been found, despite efforts from resident Chris Kent, whose garden it overhangs.

He says he doesn’t allow his two young children into his garden for fear it could fall onto them, and says he could be forced to foot the bill to have it felled, despite it being on someone else’s land.

“It’s getting more and more dangerous, especially with the weather we’ve been having recently,” he said.

“I first notified both Fenland District Council and Cambridgeshire County Council back in November and they told us they would help us find the owner of the land as they have a duty of care, but they seem to have waived responsibility.

“My children have a trampoline at the bottom of the garden and if it were to fall then it would completely flatten it.

Mr Kent enlisted the services of March tree surgeon, Daniel Fortuna, to inspect the decaying tree, and he said it should be “removed as soon as it is possible to do so.”

“The county council believe the land belongs to the developer who built our house back in 1990, but they have ceased trading,” said Mr Kent.

“It’s looking likely that we’ll have to pay to have it cut down and I’m no expert but I know it isn’t cheap.”

Mr Kent thought the issue had been resolved last month when he received an email from FDC’s parks and open spaces manager, Bob Ollier, saying the tree had been felled.

However, the tree to which Mr Ollier referred to was in Wisbech, meaning the decaying tree is still hanging ominously over houses and gardens in Elm, four months after Mr Kent’s original complaint.

Mr Kent has since been advised to report the issue to the county council.

Councillor Jan French, who has visited the site of the tree, said: “Somebody needs to help this person and we need to find the owner because the tree could fall and kill someone.

“The owner needs to take responsibility and have it dealt with and I don’t believe it should be Mr Kent who should have to pay out for it.”