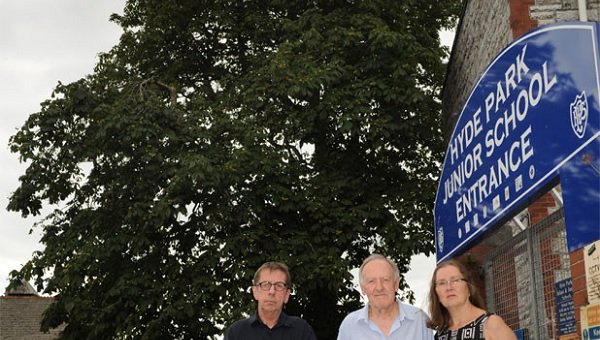 Plans to remove a decades-old tree and begin works on a road outside an infant school were halted at the 11th hour after residents and councillors objected.

The council’s planned three-day accessibility improvement works outside of Hyde Park Infant School on Hermitage Road had barely started on Wednesday when they were brought to a standstill.

The plans involved felling a horse chestnut tree, resurfacing part of a footpath and constructing build-outs to narrow the road and improve access to the school, making it safer for children.

However, nearby residents forming the Four Streets Residents’ Association complained that the tree, which they believed to be at least 80 years old, should not be felled because it was healthy.

Phil Collins, 66, owner of the nearby Devonshire Guest House on Lockyer Road, said: “At the moment there’s been a lot of to-ing and fro-ing about this concept. We lost one horse chestnut tree in the winter storms but this one survived.

“Somewhere along the line we need to stand up for nature itself. The council hasn’t consulted any of the associations in any way, shape or form.”

The residents were also concerned about only receiving written notice through their doors two days before the work was due to begin.

“The residents were only given 48 hours’ notice and another resident said she only heard it by word of mouth,” said Dr John Mahoney, ward councillor for Peverell.

“The tree is one issue and I think consideration should be given if it is found to be healthy and I believe that it was, but the works are for safety reasons and I think something needs to be done because if there is an accident, somebody could turn around and say ‘why wasn’t anything done?’”

In response, council leader Tudor Evans told The Herald: “We are extremely disappointed that Peverell ward councillors are changing their minds about this important safety scheme at the 11th hour.

“The whole point of allocating Living Streets funding to ward councillors is to give them a greater say in the highway improvements that are made in their local areas – and all three Peverell councillors agreed the scheme.

“We had also planned to level and resurface part of the footway and replace the tree at the school entrance with two new trees that are more appropriate for use on the highway. This is because the roots of the existing tree are lifting the pavement and causing a trip hazard. “This scheme would have helped to slow traffic approaching the busy junction near the school entrance and provided a safe place for children and parents to cross.

“While we understand that people don’t like to see old trees removed, this one is causing significant damage and we receive lots of complaints from people forced out into the road because they aren’t able to negotiate the narrow and broken footway surface.

“Officers are keen to reopen discussions with the ward councillors and find a way forward but there will inevitably be a significant impact on the programme and budget following this sudden about-face and I will be asking for a full investigation into the financial implications.”