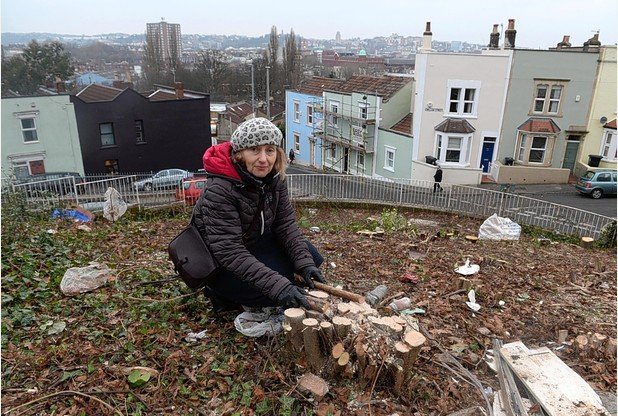 Twentyhazel trees have been felled in Windmill Hill.

Residents have condemned Bristol City Council for the move with many demanding the authority replant them.

The trees had been standing outside Poldan House, a social housing residence commissioned by the council, for more than 20 years.

Tessa Fitzjohn, from Windmill Hill, said it was poor timing by the council as the authority is supposed to be investing thousands of pounds on environmentally friendly schemes.

Mrs Fitzjohn, who is co-chairwoman of green capital partnerships for the Arts Heritage and Culture Group said: “Poldan House dominates Windmill Hill, it rises high above the Victorian terraces.

“The hazel copse was planted over 20 years to soften the architecture at the request of residents.

“Over 20 full-grown trees have been cut down and removed with no consultation of residents, notice of the work or any other form of communication to alert residents to their removal.”

She said residents were ‘horrified’ when they discovered the well-loved trees, which attract a range of birds, had been felled.

She said: “Bristol is European Green Capital this year, and spending millions of pounds greening the streets. With your help let’s do our best to keep Windmill as green as possible.”

A spokesman for Bristol City Council said the work was necessary because the trees were damaging a wall.

He said: “The hazel trees were cut due to concerns about the impact they were having on the retaining wall.

“The wall will now be assessed in more detail and any damage repaired.”

Mrs Fitzjohn said: “I think because so many people have emailed the council saying how unhappy they are the council will now hopefully plant some more trees.

“It’s quite a large area and it does look very bare without anything there.”