Residents’ fury over trees cut down by Westgate developer 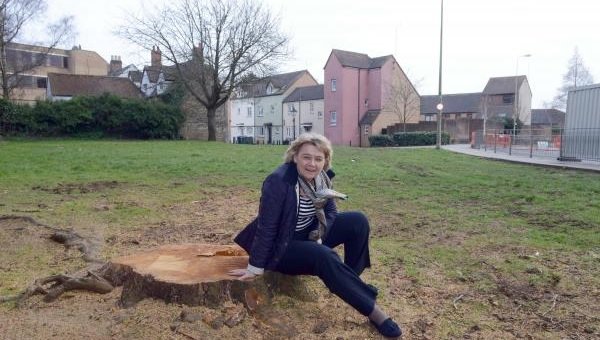 Heritage group that planted two trees near the Westgate Shopping Centre four decades ago has criticised a developer for felling them without warning.

Oxford Preservation Trust director Debbie Dance said the group was “disappointed” to discover the two 44-year-old plane trees had been chopped down.

They were located on a small grassy area between Turn Again Lane and Old Greyfriars Street, next to the Westgate centre.

The spot is to be redeveloped into a public square by the Westgate Oxford Alliance, the group behind the shopping complex’s £440m overhaul.

Mrs Dance said: “We are disappointed they have not talked to us about any of the trees they cut down, as we were the ones who planted them in 1971.

“We would have liked the developer and Oxford City Council to have been more proactive in considering us in all this.

“What they have left is not very distinguished and the replacement trees will only have a lifespan of about 15 years.”

Now the trust has called for one “beautiful” big tree to replace those cut down, instead of proposed cherry trees.

Mrs Dance added: “We looked after this spot that no one really bothered with for many years and the developer has already taken down so many trees around the Westgate.

“We think Oxford deserves one really beautiful tree to replace them and become a big part of the landscape.

“The developer should improve this area for everyone.”

Permission was granted for the redevelopment of the Westgate Shopping Centre by city councillors last November.

It will see the building off Bonn Square refurbished and the existing multi-storey car park bulldozed and replaced with a new shopping arcade.

Work started last month and is expected to finish in autumn 2017.

But developer Westgate Oxford Alliance last week angered residents when it removed the trees off Old Greyfriars Street, as well as those outside County Hall in Castle Street.

At a meeting of the city council’s west area planning committee, Oxford resident Michael Hugh-Jones said: “I am strongly opposed to removing these trees.

“They are nice and green and have stood there for 40 years.

“Now they are being cut down during the night so no one knows about it.”

The felling of trees near the Westgate also became a controversial issue in 2008, when protestors attempted to protect a tree in Bonn Square with steel barriers.

Tree occupations and protests to stop the removal of trees near the Westgate car park also resulted in arrests and security guards needed that same year.

Nicola Quinion, a spokeswoman for the Westgate Oxford Alliance, said: “While we appreciate the contribution the trees have made to the streetscape in certain streets within Oxford, the redeveloped Westgate will regenerate a large part of the city centre and create significant economic benefits for the local economy.”

She added that trees would be replanted to feature in new public squares around the edge of the development.