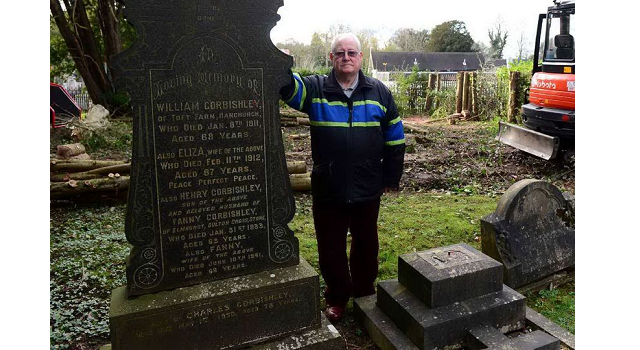 Council leaders say cutting back the overgrown yew trees surrounding the mausoleum will make the building look better and reduce the risk of anti-social behaviour.

But nearby residents say work is unnecessarily destructive, and claim some of the trees are hundreds of years old.

John Simons, who lives in Coniston Place, wants the council to stop the work immediately and review the scheme.

The 77-year-old said: “We were never told that this was happening. When I heard the noise, I thought it was just normal tree husbandry to cut back the overgrown branches, which would be fine.

“But when I went to have a look, I saw that they were chopping down the trees, almost down to ground level. When I was there, they’d already cut down around 16 trees, and it looked like they were going to do another 10.

“I spoke to the workers and they were as appalled as I was. They said some of the trees were 300 years old. But they were only contractors and so there was nothing they could do to stop it.

“The council needs to stop what they’re doing immediately. This isn’t just normal maintenance. It’s going to take a lifetime for these trees to grow back.”

The mausoleum – opposite Trentham Gardens – was built in 1808 as the final resting place for members of the Sutherland family before being passed to the Parish of Trentham.

But the Diocese of Lichfield had no funds for its upkeep and Historic England placed the building on its Heritage at Risk Register, due to uncertainty over its future maintenance.

Stoke-on-Trent City Council has now taken responsibility for the building, with £50,000 being spent on replacing stolen roof lead and installing CCTV at the site.

A city council spokesman said: “The building has suffered from anti-social behaviour and criminal damage in the past due to its secluded appearance, which has cost the taxpayer thousands of pounds in repairs.

“This work to restore the original landscape, which is supported by Historic England, will not only protect but enhance what is a fantastic and unique asset for future generations.

“Some of the trees at the site were never intended as part of the original design and have grown over many years. The work has been advertised and has received many supportive comments from the community.

“As part of the improvements, we will also be reseeding the grassed area and reinstating the gravel path, which will improve both the overall appearance of the building and the experience for visitors.