Residents buying Page Wood to protect the trees from development 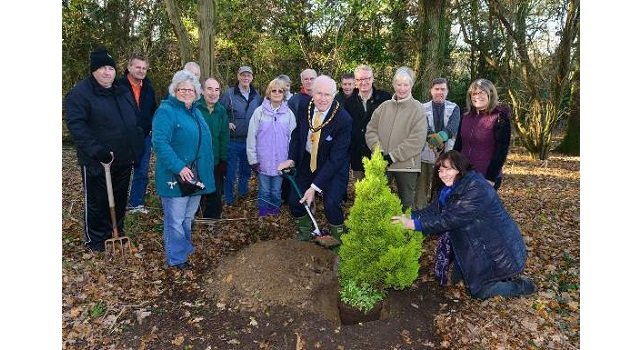 The Bowers Gifford and North Benfleet Residents Association has raised £33,000 to buy Page Woods, in order to protect it from future development.

The fundraising was aided by a £20,000 donation from Essex Council, whose chairman John Aldridge visited the woods last week to hand over the cash.

In addition to securing a further £3,600 from the Veolia North Thames Trust, residents staged a series of events to raise cash towards preserving the 2.75-acre site.

A deal has been struck between the association and Luke Benson, owner of L Benson & Sons Groundworks – a Basildon-based landscaping company.

Mr Benson bought the woodland at auction last year but learned he could not develop it as he had planned, so he has agreed to pass it on to the residents at cost price.

He told the YA earlier this year: “What I really wanted to do was to have my own yard up there, but there were a few clauses on the land which meant I couldn’t.

“We had quite a bit more money offered to buy it off of us, but we knew it meant so much to the residents’ association and they are good people.

“As long as we got what we paid, we said we weren’t worried about making any money on it.”

Elaine Horwood, of Pound Lane – a member of the residents’ association – said local homeowners were keen to buy up the woodland due to fears its future development could increase local flooding.

She explained: “Those trees all take in water when we have heavy rain. If they were gone, all that water would come down the hill and into the valley around Pound Lane. My garden gets flooded already from heavy rain and so do some of my neighbours’.”

The Basildon, Billericay and Wickford Council for Voluntary Services has donated £650 for the group’s first year of running costs.

Cllr Aldridge said: “This is exactly the kind of community-led project that our Community Initiatives Fund was set up to support. Natural green spaces such as this are precious havens for nature and wildlife and I’m sure the woodland will contribute to everyone’s enjoyment, learning and wellbeing now and for generations to come.”

Residents Association Chairwoman Rose Griffin-Twidell said: “We would like to thank the local community as they’ve been absolutely fantastic, including St Margaret’s School, who have helped with the fundraising by holding a sponsored walk. We hope to officially own the woods by the end of December.”