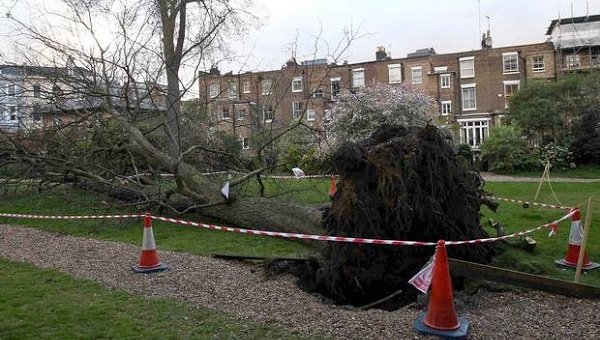 A spate of basement digging in one of London’s most exclusive neighbourhoods has been blamed for a tree crashing down in a communal garden.

Residents say it was “a miracle” that nobody was hurt or even killed when the 30ft high honey locust tree keeled over in the gardens between Elgin Crescent and Blenheim Crescent, in Notting Hill, on Friday morning.

Now some residents have called for an urgent investigation to ensure the dozen other large trees are safe.

They fear the estimated 50 basements dug on the streets since 2000 have altered drainage, compromising the trees’ stability.

Ms Johnson said: “The tree surgeon was very perplexed, he could not understand why the ground was so soggy in that garden.

“There is real concern about what could happen if other trees start toppling over because the water table is not properly draining.”

Veronika Turner, 52, of Blenheim Crescent, said: “There are a lot of basement developments going on. Last year, there were five or six going on at the same time.

“It’s excessive and unnecessary and I’m sure it’s causing these problems.

“The garden flooded last winter too, so I’d suggest the basements are ruining natural drainage systems.”

Another neighbour said: “We just don’t know the cause of it yet but no one likes basement developments because the street is chock full of trucks.

“They do displace an awful lot of soil that would ordinarily act as a sponge and hold the tree in place.”

It also says: “RBKC see no merit putting at risk its fine heritage of trees to facilitate the construction of basements.”

The tree — planted in the Fifties as part of an arboretum — is now on its side in the centre of the communal garden.

Tree surgeons called to investigate the incident said it was “an unusual situation” because the tree appeared otherwise healthy.

But Paul MacQueen, of Hendon-based Modern Arboricultural Services, added: “There is always a chance of a tree failing regardless.” He pointed out that the part of the gardens where the tree had been growing has notoriously bad drainage and has long been prone to flooding.

Hydrologists recognise Notting Hill as a difficult area to dig basements because of its hilly terrain and  clay soil.

A spokesman for Kensington and Chelsea council, which is carrying out its own investigation, said: “This had nothing to do with the basements. The tree had a very poor root system and does not do well in damp, clay conditions.”