Resident’s anger over trees being chopped down 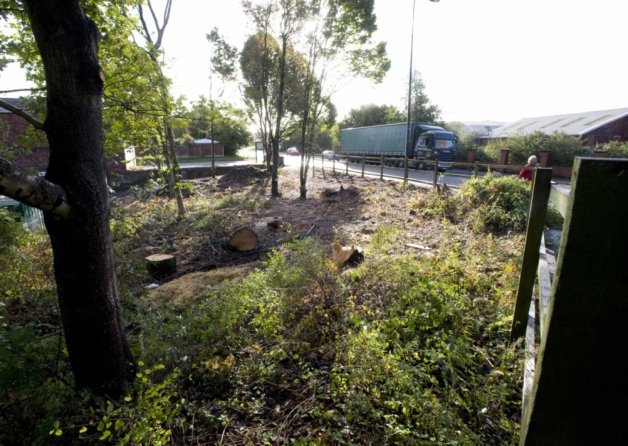 An environmental guardian is blazing because of a council tree-removal programme near the town centre.

Tony O’Dwyer, the charity marathon cyclist, makes a point of monitoring the state of tree cover as he bikes around the borough.

And today he strongly attacked a town hall project that has axed specimens near Sovereign Road and on Birkett Bank calling it an “outrageous” act.

The former landscaper is concerned that the council has removed potential wildlife habitat, including future nesting sites for birds.

He also claims that the “short-sighted” policy was helping to leave the area running behind neighbouring authorities such as Warrington in the “greening” of urban areas for residents to enjoy.

The council hit back today, saying that some of the trees removed posed a safety hazard and that new trees were also to be planted.

Mr O’Dwyer, who lives in Scholes flats, said: “People have been flagging me down while I was riding the bike, asking me what I am going to do about it. They are really angry.

“It is so short-sighted because you can bring something down with a chainsaw in a minute which will take 20 years to even half replace.

“I see all this Wigan In Bloom around and I like flowers myself but trees are the things we should be really concerned about, not tubs of flowers on the railings.

“The older trees were there before most of us and they will be there after us.

“It really upsets me and I can tell it is upsetting a lot of other people as well.”

The council’s assistant director for planning and transport, Mike Worden, confirmed today that a “small number” of trees and shrubs had been removed from surrounding verges because of the refurbishment of the former car park of the Sovereign Road depot as part of its redevelopment into industrial units.

But he insisted that the trees had been assessed “in terms of safety and quality” and those that could be retained were.

Mr Worden said: “Unfortunately, while the works were taking place further defective trees were identified, which were removed.

“Also, some trees have been removed to improve safety and security at the car park.

“In the next few months, a number of large trees will be planted in the open areas of the verge.

“This will be done once work on the car park is complete.

“This will be a significant improvement on the trees that were on site previously and as such the surrounding environment of the car park will be enhanced.”

At Birkett Bank, only a narrow strip of land from the back of the pavement was within council ownership.

The rest of the site that contains the trees in question is under private ownership and none was subject to Tree Preservation Orders, therefore, the council had no control over the management of this land.