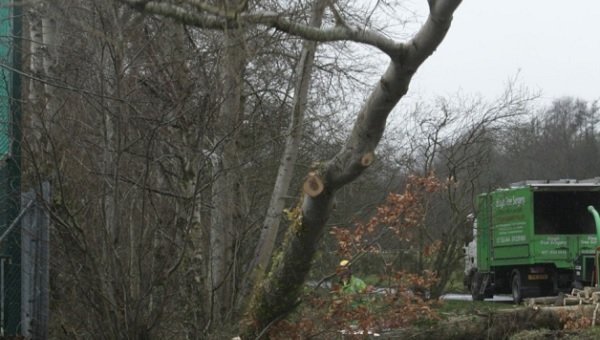 Stephen McMonagle from Kingsfort Crescent was speaking as the first of 55 mature trees was felled on site along the Bay Road Park reserve on Wednesday.

Members of Derry City Council’s Environmental Services Committee recently approved a recommendation to remove the poplar trees from within the area.

The committee also agreed to the planting of new native tree to compensate, and provide screening for the Park and local residents.

The decisions come despite a campaign by local residents, many of whom wanted the large, established trees to remain in place.

Mr McMonagle claimed that his written correspondence to a number of environmental agencies including Derry City Council regarding the trees over recent weeks have gone unanswered, prior to a letter being received yesterday as the felling works got under way.

He said: “I have exhausted every single avenue and I am absolutely gutted. I put a final request out there to at least consider a phased removal of the trees but I got no response at all back from the council. They didn’t reply to any e-mails. In fact not one person got back to me.

“The last time I got a letter out was just before Christmas. The last we heard then was about the open night they held recently.

“There has been no personal communication. I think they should be ashamed of themselves for handling themselves they way they have.”

“The decision to fell the trees was made following recommendations in the report, which outlined that 10 trees were in poor condition and an additional 45 trees adjacent to a nearby all weather pitch development site should also be removed.

“The tree survey report also outlined how the poplar trees are unsuitable in a sub-urban environment and have an invasive root network that allows new trees to establish and encroach into the Park.

“It was agreed by members that the trees be removed and new broad leaved native tree species planted as a replacement for the loss of existing trees and to provide screening for the Park and local residents.

“As part of the plan, Council embarked on a series of public information sessions to inform local residents and the general public, including Mr McMonagle of the proposals. Attendees also had the opportunity to comment on and make suggestions for the replacement planting scheme.

“The Council, as part of the consultation, explained that the felling of the trees was a necessary action for a number of reasons including health and safety and to protect Council against any future claims for damages, and are satisfied that it fully consulted with the public on the project.”